I've been thinking a lot about fathers lately. My father and my father-in-law haven't been healthy for quite a while. It has been hard to watch them lose their ability to be vigorous and productive, and finally to see them require constant care. They have been embarrassed by their helplessness but unable to talk about it. I certainly have been self-conscious helping them. Role reversals are awkward. 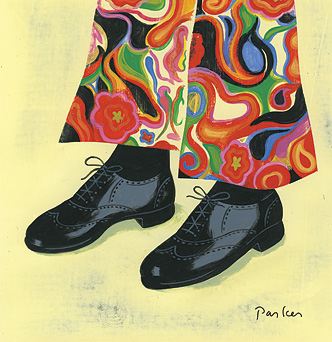 My two fathers are members of Tom Brokaw's Greatest Generation. Neither was a hero, but both accepted the challenges that world events shoved in front of them. My father, then eighteen, barely escaped Vienna in 1938 with a ring on his finger and his optimism undamaged. A few years later, he was back in Europe with the U.S. Army, interrogating German prisoners. Despite my brother's and my repeated questioning, he kept his war stories to himself. It took him fifty years to reveal that he had briefly returned to Vienna with other Jewish refugees -who became soldiers.

My father-in-law was too young to enlist after Pearl Harbor, but after turning eighteen he joined the U.S. Marines and ended up on Iwo Jima. Ever since, he has enjoyed using the Japanese he learned during the occupation, though his stories never explained his shrapnel wounds.

If there is something great about the members of my father's and mother's generation, it is their determination to do what was needed, without making a big deal of themselves or their accomplishments. They worked hard to provide suburban homes, comfortable lives, and superb educations for their baby-boomer families.

We who came of age biologically, intellectually, and politically in the 1960s have far surpassed our parents in our understanding of the world around us. Conservatives today sneer at what we did and learned during the '60s, ignoring how hard it was for us to abandon the certainty that kept our fathers moving forward. Brown was hardly a hotbed of radicalism in the late '60s, but my professors and especially my fellow students forced me to question the assumptions of my parents's generation about politics and sex, drugs and morality, science and the good life. What angers conservatives the most is precisely the repeated moments when our generation tried to take responsibility for making our world and our country a better place. We were young and arrogant and often frightened, but we took risks for what remain good causes.

Now that I see my fathers unable to be effective, I wonder about my generation. We know so much more than our parents—about how politics really works, about the world beyond U.S. borders, about humanity's impact on a fragile planet. We are the best- educated generation ever, but sometimes it seems that we have used that education mainly to create a good life for ourselves, to accumulate more than any previous generation could imagine. We know the damage modern industrial life has inflicted on the environment, yet we have been reluctant to adjust our profligate lifestyles. Now that global warming is a threat, not just a theory, are we prepared to do what needs to be done? Are we willing to make the kind of sacrifices our parents made?

Generations don't get to choose their historic tasks. My father and father-in-law risked their lives to save a world plunged into chaos by their fathers. Our task is not as dangerous, but much more complex. We don't have much time left before our children are helping us feed and dress ourselves. We don't need to be heroes. We only have to do what we already know is necessary.

Steve Hochstadt is a professor of history at Illinois College. Since he wrote this essay, his father has died.

Reader Responses to Fathers and Sons