Happy To Defer To Him

Jonathan Levine wasn't eager to tell Sir Ben Kingsley how to act. After casting the Oscar-winner in The Wackness, the fledgling director said, "The worst thing would have been if I were so obnoxious that I felt the need to direct Ben Kingsley. He would have been like, 'Dude, what are you telling me? I know what I'm doing here.'" Levine was nervous when Kingsley arrived on the set, "but once I realized we were on the same page philosophically, I was happy to defer to him." 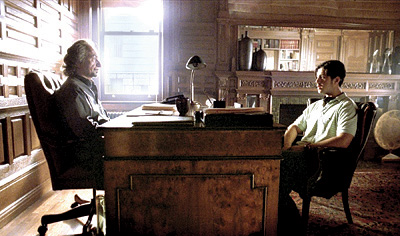 The Wackness is set in Manhattan and stars Kingsley as Dr. Squires, a shrink who dispenses kooky advice to his seventeen-year-old patient, Luke Shapiro (Josh Peck), in exchange for pot, which Luke sells from an Italian-ice cart. The two forge an unlikely bond. "Ben said he wanted Josh to lead the scenes they were in together," said Levine. "He disarmed everyone on set and allowed us to be creative and not intimidated by his reputation or intense charisma."

Speaking by phone from the backseat of a limo en route to New York's JFK airport following a week of Tribeca Film Festival screenings for The Wackness, Levine was clearly enjoying the ride. He's been preparing nearly two decades for Hollywood's fast lane.

Levine was raised on Manhattan's Upper West Side and began shooting shorts on the family Super 8 camera at age twelve. Arriving at Brown to study semiotics, he recalled, "I had a very mainstream sensibility until I started studying with [modern culture and media studies professor] Leslie Thornton. In our class of fifteen, probably myself and two other people were trying to do traditional narrative. Everyone else was doing double-exposure experiments or other weird stuff. In terms of craft, I became much more eclectic, and by the time I graduated I had much better taste in movies."

Levine spent a year as personal assistant to writer-director Paul Schrader, who wrote Taxi Driver and Raging Bull. Getting coffee and being a fly on the wall convinced Levine that he needed to go to film school.

Trading on Schrader's clout and the strength of a sixteen-millimeter film Levine shot during his senior year at Brown, he entered Los Angeles's American Film Institute's directing program in 2002. At AFI he made four short films, wrote two feature scripts (including an early draft of The Wackness), and forged connections that led to his slasher movie, All the Boys Love Mandy. Levine managed to stretch a $10,000 fee over two years in order to bring the film, written by Jacob Forman '94, '98 MFA, to fruition. His perseverance impressed Mandy's financiers. "They asked me what I wanted to do next, and I showed them the script for The Wackness," Levine said. Last winter the film screened at Sundance, where it was nominated for the Grand Jury Prize and took home the Audience Award.

Like the protagonist in his coming-of-age story, Levine was a hip-hop–loving Manhattan teenager during the summer of 1994. Did he, like Luke, earn his college tuition by selling grass from an ice cream cart? "I certainly knew people like that who I had on speed dial, but I never did it myself," Levine laughed. "I just liked the idea of having an excuse to go all around New York in the summer and hang out. Some people have girl fantasies. I guess I have Italian-ice fantasies."

Reader Responses to Happy To Defer To Him