His Year of Dating Vicariously

Bob Morris is not a writer known for mawkishness. In fact his "Age of Dissonance" column, which ran in the New York Times for eight years, tapped a rich vein of bitchiness as it mocked the hypocrisies and absurdities of modern living. ("Why be just superficial when you can be deeply superficial?" he once wrote of New York City's love of beautiful people.) So Morris's new memoir, Assisted Loving: True Tales of Double Dating with My Dad, comes as a sweet surprise, layering his familiar barbed observations with nothing more or less complicated than love. 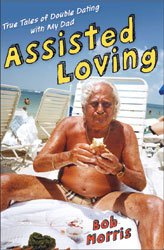 In 2002, Morris's mother, Ethel, dies, leaving her husband, Joe, and two sons. The older, Jeff, is married with kids. Bob is single, living in the West Village, writing for the Times and Travel & Leisure, and flitting from one society party to the next. Joe, on the other hand, is now alone in the family homestead on Long Island, where he watches tennis on TV and lines up bridge games on his cell phone, like a bookie placing bets. Bob writes that his dad's ring tone, from "The Mexican Hat Dance," "is the only politically incorrect ring tone I ever heard." That doesn't faze Joe any more than the food stains covering his yellow cardigan.

What does faze Joe is loneliness. He misses his wife, and just seven months after her death, he begins circling personal ads in the paper. Worse still, he asks his son to call these ladies—to pimp for him, as Morris puts it. "Oh, and do me a favor, Bobby," Joe says. "When you give women my cell phone number, make sure you tell them to call me after nine p.m. Off-peak minutes."

So it happens that Bob, a sarcastic, paunchy, middle-aged gay man, begins a year of vicarious dating, vetting older women for his father. It's rough going. Rita doesn't smile enough ("She's no Dinah Shore," Joe pronounces). Selma is a Kama Sutra enthusiast (a nut case, Joe says, "a Jewish Shirley MacLaine"). Lorna turns out to be a former socialist ("When she told me that, I asked for the check and sent her home"). Still, Joe keeps at it, gamely playing the field.

Joe, too, finds love—in Doreen, who wears a wig "like a big cheese Danish sitting there on top of her head," Morris writes. Still, he concludes, "I can see, as clear as her nail polish, that this Doreen, wig and all, is nothing less than the perfect match for the old man. She's able to adore him, inspire the romance he craves, and receive his affection openly. No, she isn't quite as impeccable as I require. But she has this way of looking us both in the eye and listening just the way my mother did. And really, after watching him date all year, it's obvious to me that someone as nice as my mother is all we really need again in our family."

Reader Responses to His Year of Dating Vicariously