They called them "ketchup-tasting parties." In January of 2008, Mark Ramadan '08 and Scott Norton '08 invited some thirty people over to their apartment and asked them to sample eight homemade ketchups in flavors such as Tex Mex (flavored with chipotle peppers, cayenne, and chili powder), Christmas (nutmeg, cinnamon, and clove), and Asian (ginger and Korean chili paste). Ramadan and Norton also served what they called "blondes"—yellowish ketchups flavored in one case with ranch dressing, and in another, with Greek yogurt and honey. 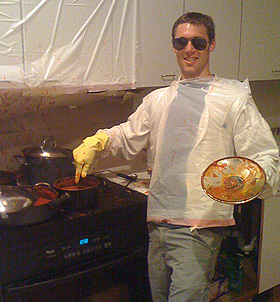 From these highly unscientific focus groups Sir Kensington's Gourmet Scooping Ketchup was born. All natural and 100 percent organic, it is hand-brewed in Norton's kitchen. But Ramadan and Norton hope that in time Sir Kensington will do what no other brand has accomplished in decades—take a bite out of Heinz's domination of the market.

"It's all about the promotion," says Ramadan. He and Norton created the character Sir Kensington the same way they invented their ketchup recipe—with a little bit of this and a little bit of that. Their Web site (www.sirkensingtons.com) says Sir Kensington "invented ketchup because Chateau Saint Julien Medoc Christophe Juliard-Beaucaillou was too pedantic for his palate" (the wine is fictitious, too). It also claims that Sir Kensington attended Oxford and Cambridge universities, was knighted, and "invented romance when he tired of committing adultery."

"The package you are getting, it's the whole Sir Kensington experience," Ramadan says.

Ramadan and Norton started brewing batches of their ketchup in April at Norton's off-campus apartment. ("He had a dishwasher so it made everything much easier," Ramadan explains). After seeing the results of their ketchup parties, they chose two flavors—classic and Tex Mex (since renamed Spice). The blondes bombed.

Ramadan and Norton simmered their ketchup mixtures for one-and-a-half hours and then heated the ketchup to 190 degrees Fahrenheit before sealing it in airtight jars. "I would be pouring and Scott would be sealing immediately," Ramadan says of their first efforts. "It was a ridiculous fiasco. He would get burns all over his hands." Actually, Ramadan had it worse. The bubbling ketchup would explode into his face. "We called them Kensington kisses," he says. After a few weeks of torture, the two began wearing aviator sunglasses and long-sleeved T-shirts and wrapping large garbage bags around themselves to create makeshift aprons. Ramadan says they looked like spacemen.

A month later they had sold nearly 200 six-and-a-half ounce jars of ketchup online and at a party at a downtown restaurant, where 130 people were offered the special introductory price of $6 a jar, two for $10. All in all, the two say they just about broke even.

Sir Kensington's tastes fresher, more tomato-ey than supermarket ketchups. It contains sugar rather than high-fructose corn syrup. But all this still may not be enough. According to a 2004 New Yorker article by Malcolm Gladwell, Heinz has pretty much nailed the perfect ketchup—the ideal combination of salty, sweet, sour, bitter, and umami, which adds body and a sensation of thickness. Over the years, competitors have tried to match Heinz's appeal, but they've inevitably thrown off the balance between all those senses of the palate. Today, Heinz commands 60 percent of the U.S. ketchup market.

Ramadan and Norton remain undaunted; they figure Americans buy a variety of mustards and other condiments—why not ketchup? With newcomer Win Bennett '09, they plan to develop a business plan this summer. They aim to target upscale restaurants doing gourmet takes on classic American food. Pewter top hats filled with Sir Kensington's will be placed on tables with a serving spoon shaped like a cane. If that goes well, the company will target high-end grocery stores, aiming to sell a million jars a year.

"We need to figure out logistics," Ramadan says. "Is this actually possible?"