On a wall in the office of Eli Adashi, the outgoing dean of medicine and biological sciences, hangs a framed copy of Anthony Hecht's poem "Prospects." Adashi refers to it often, and he reads it to the medical school's graduating class at every Commencement. The poem describes an unspecified journey toward "the sublime," a voyage undertaken "without provisions, without one thin dime" that passes "the scene of an old crime." The traveler is "riddled with doubt" about the journey's success, yet in the end expresses "no doubt we shall arrive on time." 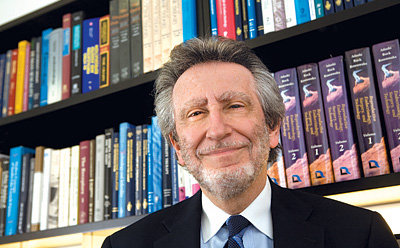 The language and sentiment seem characteristic of Adashi, who stepped down as dean on July 1. (His successor is chair of the department of medicine Edward Wing, who will be profiled in the September/October BAM.) "The reason it's hanging on the wall," Adashi says, "is because I think it is the sound track of our life." Adashi, who became dean in January 2004, surprised many in the University community by stepping aside after only four years in the job. But, he says, referring to the medical school, "We've taken it as far as we could. I was given a task. I was given the goods, and I thought it was time for a different approach."

When Adashi became dean, he took charge of a program that was poised to expand quickly. Roughly 105,000 square feet of biological research space had recently been added in the old jewelry district of downtown Providence, and thanks in part to a $20 million gift from Sidney Frank '42, a life-sciences building that would add another 169,000 square feet was already under construction. (The expansion would increase Brown's lab space in the biological sciences by about 75 percent.)

In addition, President Ruth Simmons's Plan for Academic Enrichment called for expanding the number of both faculty and medical students, and Adashi was asked to pull the school's academic ranking into the top 25 percent of U.S. medical schools. Most difficult, perhaps, would be instituting a new agreement between the medical school and its affiliated hospitals, an agreement largely negotiated by Provost Robert Zimmer, who in 2006 left Brown to become president of the University of Chicago.

So how did Adashi do? The numbers look good. With ninety-six students, the medical school's class of 2011 is the largest ever. Traditionally, the class has consisted almost entirely of students in the Program in Liberal Medical Education, which begins freshman year and ends with medical school graduation, but the bigger classes have added more premed students into the mix. In addition, the medical school has risen twelve places—into the top 25 percent of U.S. News & World Report's annual research rankings, on a par with medical schools at Dartmouth and the University of Iowa.

Adashi has overseen the hiring of an additional twenty-two professors in the biology and public-health programs, and twelve more searches are under way. As a result, the number of tenured faculty members in the division of medicine and biological sciences has risen to 110 over the past four years, a 40 percent increase since Adashi took over.

Adashi benefited from last year's $100 million gift to the medical school from the Warren Alpert Foundation, which resulted in the medical school's name change from Brown Medical School to Warren Alpert Medical School of Brown University. The majority of the Alpert gift will go toward another major goal Adashi inherited: to create what he calls "a physically distinct and programmatically coordinated health sciences center." Brown has long wanted a physically distinct medical school and now has a major chunk of money it can use toward achieving that goal. The University is now considering two sites in Providence.

A major obstacle to an expanded and programmatically coordinated health center, however, continues to be the medical school's relationship with the hospitals and with the physicians who make up the clinical faculty. Adashi believes he has been successful at improving "the tenor of the conversation" on these issues, but his successor inherits the task of resolving them.

The obstacles are many and complex, but a major one is the decentralization of funding. Unlike the deans of most other medical schools, Brown's can fund research and education only through grants, tuition, gifts, and the draw from its endowment. At Brown, most of the money practicing physicians bring in stays in their department, while at most other schools a greater school-wide sharing of those significant resources takes place, allowing for better strategic planning. A portion of the Alpert gift is aimed at improving this situation, and Adashi, at the faculty's request, has convened a committee to look at such issues as tenure and sabbaticals as a way of giving physicians more academic status in exchange for sharing the wealth.

"This is not something we really focused on," Adashi says, "because we had to focus on so many other things. I focused heavily on creating a sense of oneness among the various constituencies in the division, on campus and off." The next dean, he believes, will have more cohesiveness on which to draw.

You might even say that the journey toward the sublime will continue for the medical school, though this particular traveler has stepped aside.

Reader Responses to The Traveler Rests