A Wig and a Cane

Peter DuBois traces his theater career to the wigs he found in his mother's bureau drawer. He invited the neighbors over, and in the backyard of his family's house in Enfield, Connecticut, he extemporized skits along the lines of "Grandma Takes Uncle Eddy to the Supermarket.""I had a little cane and wore a wig," he recalls. "It was variations on a five-year-old's approach to drag." 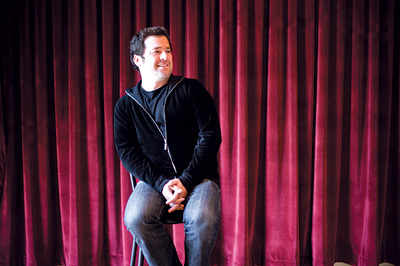 Leah Fasten
DuBois's career as a theatre director has taken him from Providence to Alaska and from New York City to Boston.

Thirty-five years later, DuBois is one of the biggest stars in the theater scene's firmament, the artistic director of the prestigious Huntington Theatre Company in Boston. He assumed the post in July, after spending five years as a producer and director at the famed Public Theater in New York City. Over the years, he has worked with such playwrights as Sam Shepard and Suzan-Lori Parks and such actors as Philip Seymour Hoffman and Meryl Streep. This season he will bring Kate Burton '79 and her son, Morgan Ritchie '10, to the Huntington to star in The Corn Is Green, a 1940s drama about an impoverished Welsh coal-mining town.

At Brown, DuBois (pronounced dew-bwa) studied with Pulitzer Prize-–winning playwright Paula Vogel, who, he says, taught him about "everything from aesthetics to business to relationship-building." He was particularly influenced, he says, by her refusal to romanticize the theater. She used strong military metaphors, he says, and told her students, "There's a battle out there, and you need to think of yourselves as generals." To this day, DuBois says he doesn't think of theater as something "precious"—a play, he says, "is totally something the audience can have access to. It is not something you have to experience at a distance."

Playwright Deborah Brevoort '93 MFA, who taught DuBois while she was a visiting professor at Brown in 1995, recalls a production he directed in which white sheets were spread all across the stage, an emphasis on visual images that he borrowed from the avant-garde theater of eastern Europe, she says: "He was working visually in a way that American directors normally don't work. It was thrilling."

In 1998, Vogel and Brevoort helped DuBois secure a position as artistic director at Alaska's Perseverance Theatre. The state's largest professional theater, it is located on an island near Juneau. Access to the island is solely by plane or boat. All around are mountains. "The weather was often so forbidding that I was grateful to have the theater to work in," DuBois says.

DuBois took risks at Perseverance. He cast teenage actors in a production of Romeo and Juliet that shocked some audience members because of its sexual explicitness. "I got hate mail," he recalls. He also directed In the Blood by Suzan-Lori Parks, an adaptation of The Scarlet Letter that features a ménage a trois.

But it was also clear after DuBois's five-year term at Perseverance that he understood the very conservative undertaking of institution-building. He raised $2.5 million and brokered a deal with the University of Southeast Alaska under which Perseverance would run its theater department.

In 2001, DuBois premiered an adaptation of Moby Dick that interwove episodes about Nantucket whalers with stories he'd collected from native Alaskan Iñupiat whaling captains. The production toured the state, sparking a civic dialogue on the different experiences of whites and indigenous Alaskans in the whaling industry. The show was supported and attended by many of Alaska's top politicians and expanded Perseverance's stature and clout in the state.

By 2003, when he moved to The Public, DuBois says his experimentalism had been somewhat tempered. "You have to bring an audience along," he says. "At the end of the day if the story isn't clearly told, it's a disaster."

For his first season in Boston, DuBois has programmed an eclectic mix of shows that he says "represents who I am. I tend to be hot-blooded and very passionate." October's Boleros for the Disenchanted by José Rivera is a love story about Puerto Rican immigrants to America. Next spring comes the world premier of David Grimm's The Miracle at Naples, a bawdy comedy about a troupe of commedia dell'arte players in Renaissance Italy.

Meanwhile, DuBois aims to expand the theater's facilities, develop a playwriting festival on Cape Cod, and enhance the Huntington's reputation by bringing in New York City talent and taking more of a leadership role among the nation's theaters.

As far as he's come, DuBois still says he traces his desire to make theater back to those days when he was doing shows for the neighbors. "I'm pretty much doing what I was doing as a kid," he says. "I'm telling stories and putting on theater."

Reader Responses to A Wig and a Cane