Here's the scenario: The CIA has received intelligence that a shadowy organization calling itself DEATH plans to assassinate Afghan politician Abal Nuleeder during his upcoming trip to Providence. Despite the agency's best efforts, Nuleeder has eluded surveillance since entering the United States. The task of locating him now falls to the FBI agents. All they know is that the Afghan is traveling with a large amount of cash and that in the past he has had some contact with Brown professor Don Bubba Juan.Today is Monday. You have until the end of the week to figure out what's going on. 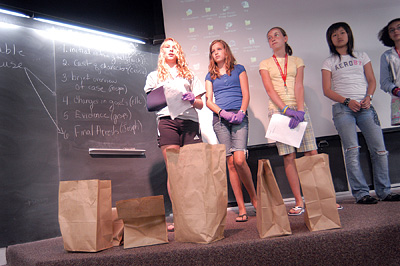 Photos by Frank Mullin
Middle schoolers learn about probable cause and present evidence they collected at the scene of a bomb blast.

This was the task given to a group of nineteen middle school students this July in a forensics class that was part of Brown's SPARK Science for Middle School Students program. Brown biologist Beth Zielinski '97 PhD led the class with a cast of visiting faculty, including the superintendent of the Rhode Island state police, special agents from the FBI, and an assistant U.S. attorney. The pros delivered lectures, but they also grilled the students on the evidence and questioned the theories they'd developed as if the kids were going to present their case in court. "I have to order in lunch every day because the kids don't want to leave the class," Zielinski says. "You know how middle school kids are. They're dying to arrest somebody."

Now in her fourth year of teaching the course, Zielinski says she leaves scripting the crime to the authorities: "The FBI made it up because I said, 'You know what? You guys are so twisted it would take me years to make this crap up.'"

In fact, the G-Men got so into it that one of them took a pipe bomb down to an agency office in Rhode Island and set it off. Then it was placed at a fake crime scene, where the students were sent to gather evidence and look for clues.

On Tuesday, the second day of the class, one group of students interviewed Professor Don Bubba Juan (as played by an FBI special agent). In the meantime, another group of students, the Emergency Response Team, was notified that a bomb had exploded on campus. They raced to the crime scene, finding a footprint, bomb parts that had been strewn all around, and a fragment of a valise. 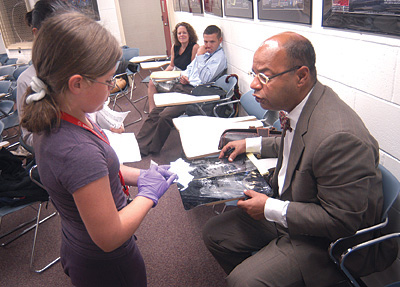 A young investigator presents evidence to former prosecutor Richard Rose, the anti-gang coordinator at the U.S Attorney's office in Providence.

Over the next few days, the students holed up in the lab to analyze DNA, unlock encrypted computer files, and match fingerprint and footprint samples. The kids tend to be pretty academic and science-oriented, Zielinski says, so being inside on a summer day was not a drawback. Finally, they made a formal presentation, laying out their theory of what happened and why the culprits did it. "We really get [students] to slow down and think about what they are doing," Zielinski says. "They had to get up and say, based on what they found, 'Here are the reasons we feel we had probable cause to arrest these people.'"

The students' analysis of the footprint and luggage piece found at the scene of the bomb explosion indicated that both belonged to Juan. And their debriefings of confidential sources revealed that Juan had procured a list of DEATH members, which he offered to sell to his old friend Nuleeder for $1 million. The students theorized that Juan persuaded Nuleeder to pay him in advance. Then he set a trap for the Afghan, planting a bomb on the Brown campus and instructing Nuleeder to meet him there for a secret assignation.

Much to the delight of Zielinski, who has four kids of her own, the students nailed it. "In one week," she says, "these kids learned more than they do in the police academies."