How Much Danger in a Light Bulb?

Most scientific experiments don't begin this way. Natalie Johnson '08 took a light bulb, placed it inside a bag, and smashed it with a hammer. One hundred more smashed bulbs and she was finally finished. 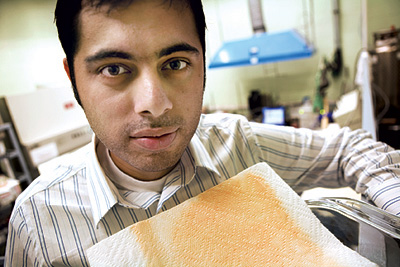 The bulbs in this case were compact fluorescents (CFLs), the increasingly popular coil-shaped variety that is both more energy efficient and longer lasting than traditional incandescent bulbs. When CFLs shatter, however, they release a small amount of mercury vapor, a known neurotoxin, which has public health advocates worried about the bulbs' proliferation. That's where the bag comes in. Johnson was experimenting with a variety of materials that she hoped would absorb the gas before it spread into the environment.

Last year nearly 300 million CFLs were sold in the United States, where they are promoted heavily by the U.S. Environmental Protection Agency and environmentalists as a way for average consumers to reduce their energy consumption and combat global warming. But to get the bulbs to produce an acceptable light, manufacturers add mercury vapor.

The EPA says the health threats the mercury poses are minimal. For one thing, the amount inside each bulb is small—about five milligrams, an volume that would cover the tip of a ballpoint pen (Older thermometers, by contrast, contained about 500 milligrams.) What's more, environmentalists point out, most atmospheric mercury comes from coal-fired plants that generate electricity. By using less of this electricity, CFLs should greatly reduce the amount of mercury these facilities release into the atmosphere, a reduction that would more than offset the amount of mercury in the bulbs.

All the same, mercury can cause brain damage in young children and, if inhaled by pregnant women, to their fetuses. If you break a bulb, the EPA recommends leaving the area and ventilating the room for fifteen minutes by opening a window or running a fan. It also suggests recycling the bulbs so they don't break in the trash or in a landfill.

It's to minimize this health risk that Johnson, graduate student Love Sarin '05 ScM, and their mentor, engineering professor Robert Hurt, set out to a find a mercury-absorbent material people could quickly throw over a CFL when it smashes.

They've come up with a cloth about the size of a paper-towel sheet that can be made from either nanoselenium or carbon. Nanoselenium is an extraordinarily absorbent new compound Sarin created in the lab. Over a twenty-four-hour period it can sop up nearly 100 percent of the mercury vapors released by a CFL. But it's expensive—Sarin says mass production would make it more affordable—and because it's so new, its safety and environmental effects are still largely unknown. Carbon is well-known and easily manufactured, but you need 100 times more of it, and even then it can only absorb only about 80 percent of the vapors over twenty-four hours.

Sarin says there is still more tinkering to do with the makeup of the materials. He theorizes that most bulbs break when they are being changed and believes every bulb should be sold with a cloth so it would be handy should something happen. But that would also undoubtedly increase the cost of the bulbs, which are already more expensive than conventional ones.

With environmentalists, corporations, and government agencies all trying to get CFLs into every home and commercial and office building in the United States, the number of CFLs in use will surely continue to rise. As hundreds of millions of bulbs fan out over the country, more and more of them are likely to be dropped and break. Sarin believes we should do whatever we can to reduce their danger. "It's not like the mercury is hundreds of miles away from your home," he says. "It's right in your home. We just want to manage this risk.

To make good food choices these days, you have to sort out global trade, politics, and environmental issues. Even experts can’t do it.
Ever True

Reader Responses to How Much Danger in a Light Bulb?