She was hemming and hawing and showing signs of indecision and ambivalence, so finally Robin Graves '82 put the question to her sister directly: "Was she still willing to go through with the kidney transplant operation?" No, her sister answered. She couldn't give up the organ, even for a sibling. "I don't know if she was afraid or what," says Graves. "All I know is that I was devastated." 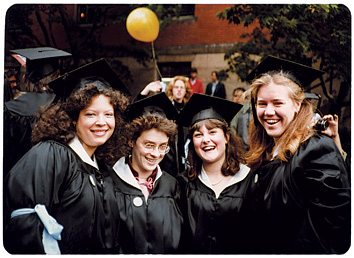 A few days later, Graves sent an e-mail to her freshman-year dormmate, Martha Hansen '82. "My sister backed out. I don't know what I'm going to do," it said. Hansen, who knew that her longtime friend suffered from an extremely rare kidney disease called C1q nephropathy, immediately wrote back, "Let me look into what I can do."

On July 31, some eight months later, Hansen was in a Denver hospital undergoing a kidney transplant on behalf of Graves. It was not a direct transfer because the two women don't have the same blood type. Instead, under the supervision of an organization called the Alliance for Paired Donation, an elaborate cross-country kidney swap took place involving six people.

Here's how it worked:

Hansen, who lives in Albuquerque, flew to Denver and donated her organ to someone with her blood type. The husband of her kidney's recipient, meanwhile, flew to Alabama to give his organ to a second recipient. Finally, a donor solicited by the Alabama recipient flew to Winston-Salem, North Carolina, where Graves lives, to give her a donation. Thus three people each received a new kidney, though because of mismatched blood types, not from the donor each had found.

Graves and Hansen met freshman year, while living on the same floor of Mead House in Keeney Quad. They'd instantly become fast friends. "She just seemed very quiet and gentle, and that was very comforting to me because I was feeling shy and a little disoriented," Hansen says. Graves offers a similar explanation: "We were both overwhelmed freshman year, and she was just this really nice, down-to-earth person." After graduation, they went off in different directions, but remained in contact and occasionally visited each other.

In 2003, Graves was diagnosed with C1q nephropathy. Tests showed that the protein C1q, normally present throughout the body, was for unknown reasons building up inside her kidneys and causing extensive damage. By the spring of 2004, she suffered the near-complete breakdown of both her kidneys. She needed to go to dialysis three times a week so a machine could do what her kidneys normally would: remove the waste products from her body. Dialysis is "just the most god-awful experience I've ever been through," Graves says. "It's like a jail sentence."

She had to sit there for four-and-a-half hours at a stretch surrounded by much older people who she knew were past the age for a kidney transplant. "You think, 'This is their life, the rest of their life,'" says Graves. "It's depressing."

She felt exhausted after each round of dialysis. In between sessions, fluid built up in her body, causing her to gain as much as ten pounds over just a few days. The build-up also caused a "metallic, toxic taste in her mouth," she says, which took all the pleasure out of eating. In August, she left her job as marketing director for Hanes clothing and went on disability. "Dialysis just takes over your life," she says.

Graves signed up with the National Kidney Registry, but the average waiting time is two to three years. She couldn't bear to continue on dialysis. Then, in mid-2007, her sister came forward to offer Graves her own organ. Since her sister backed out of the operation, the siblings have not talked.

Hansen was willing to come to her friend's rescue because, as she says, "I have this gift of good health, really, and if I can share that with somebody that would be great. I have some good health to spare."

Kidney transplants have become fairly routine and relatively low-risk procedures by now, but there is still the danger that Hansen might one day get into an accident or fall ill and lose the function of her remaining kidney. With only one left, a transplant would be that much more urgent, and she might not be as lucky as Graves in finding a donor. "But those possibilities are just possibilities," Hansen says. "Robin needs something now."

After about a week in the hospital, both Hansen and Graves were recovering well at their homes. "She's my angel," Graves says about her friend. "She's giving me a second chance at life."