When President Ruth Simmons chose Edward Wing as the new dean of medicine and biological sciences earlier this year, she signaled her willingness to try a new approach. 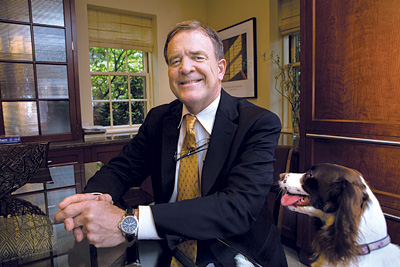 Wing, who became dean on July 1, has been a Brown physician and administrator since 1998, when he arrived as chairman of the department of medicine. Since then he has become physican-in-chief at four of the Alpert Medical School's six affiliated hospitals. His experience in the medical trenches may be key to moving the medical school beyond the stubborn obstacles it has faced since its founding in the 1970s.

Unlike older medical schools, Brown is still working out an efficient arrangement with its hospitals. Wing says he sees one of his major assignments as "bringing the medical school more and more in line with the structure of other medical schools." That's important, he says, because "there has not been common strategic planning between the clinical departments and the hospitals and the Brown Division of Biology and Medicine."

One measure of how crucial this is to Brown is that, unlike his predecessors, Wing will report directly to Simmons. "I've been chairman of medicine for ten-and-a-half years," he says, "so I know the hospital systems and the clinical departments. I know the campus departments and faculty. So I have an advantage over other deans in knowing the issues and players so well."

A respected administrator, Wing's effectiveness will rely on his ability to operate in the sometimes contradictory cultures of the market-based hospitals and the research-focused university.

"The hospitals don't like to hear this," he says, "but they rely on Brown's name. Without the medical school, the hospitals would be regional clinical hospitals. They would not be academic medical centers and would have difficulty competing with academic centers like the ones in Boston. Without that, you also don't get first-rate training programs and you don't get students."

Similarly, he continues, Brown's medical school needs the hospitals for its success. "The excellent clinical care and the range of patients at the hospitals are essential for the medical school," Wing says. "How do you train a medical student without first-rate clinical operations? And you can't do clinical research without a robust clinical base. The hospitals and the Alpert Medical School are very interdependent."

Wing says that choosing the site for a new medical school and having an identifiable Alpert Medical School building is an important first step. "I think that is the number-one priority," he says. The final decision on a site should be made by the Corporation this fall.

Mostly, though, Wing will be trying to get the hospitals and the medical school to agree to a common strategic plan, one that will call for more sharing of financial resources—which may be difficult for the hospitals to do.

"Keep in mind," Wing says, "that the mission of the two groups is naturally somewhat divergent. In Rhode Island, reimbursement to physicians for uninsured medical care is among the lowest in the country. And there are a large number of patients here who have no insurance or are underinsured. And the hospitals must compete with one another, not just in Rhode Island but regionally. On the other hand, the University is more research oriented, so its culture is different. It's less financially urgent."

Wing's success as dean will depend on his getting these two institutions to finally become true partners. "I know the issues," he says. Now he just has to make sure he resolves them.

Reader Responses to The Player