After the depth charge split the submarine in half, Edward Krug looked down from the cockpit of the B-24 bomber and saw German sailors scrambling to escape into the freezing waters of the Atlantic Ocean. He guessed that about twenty-five would survive. Another twenty or so went down with the U-boat. 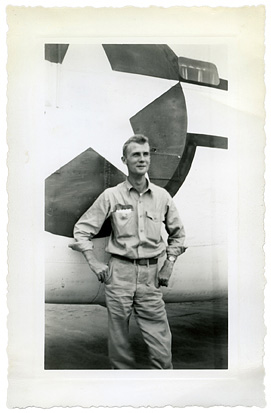 "Those poor bastards," Krug thought. He dropped down a life raft, but he doubted it would do them much good. They were 800 miles east of the Brazilian coast. Only Allied ships plied these waters, and their crews never numbered more than 20. They weren't about to pick up a group of German soldiers that outnumbered them. "It may have been more merciful to machine gun them and get it over with than doom them to a slow death by dehydration," Krug says.

Krug, who now lives in Harrison, Arkansas, won a Distinguished Flying Cross for his bravery that day. His efforts between 1942 and 1944 ensured safe passage for merchant vessels traveling to Africa with supplies for the Allied powers. Yet it was that day over the Atlantic that has stayed with him. In a way, he had no choice but to drop the life raft and return to base—he was about to run out of fuel. "I did what I was ordered to do," he adds. "I did what I had to do to survive."

All the same, as he moves into the ninth decade of his life and listens to the daily reports about America's latest wars overseas, the image of those stranded Nazis occasionally haunts him. "I think of me facing my maker," he says, "whether it's Saint Peter at the pearly gates or whoever, and being asked to account for my actions." He pauses, then adds: "I wonder what I'm going to say."

When asked about that time in his life, Krug can recall it in remarkable detail. He remembers being sent to Brazil in 1942 by the U.S. Navy to help protect what was known as the "Slot," the shipping lanes vital to fighting the Italians and Germans in north and east Africa.

"We were there to intercept and destroy the German submarines," Krug says, but it was easier said than done. You couldn't fly at night because it was too dark to see the subs. And the subs were fully submerged during the day, too far under to target effectively. To succeed, you needed to arrive at sunrise, when there was enough light to fly but the subs had still not begun to go under.

But that meant knowing exactly where the Germans would surface. As it turned out, the Nazis, in their drive for efficiency and organization, assigned each sub a specific time when it would surface and transmit its coordinates back home. The time, day in, day out, never varied. Intelligence officers intercepted the messages. They also learned to recognize which sub was sending the message by the distinctive rhythm of the fist beating out the Morse code. They quickly figured out the route the sub was traveling and could predict when and where it would surface. They could then pass these projections on to Krug and his fellow pilots so they could to arrive at the crack of dawn. "The Germans were victims of their own sense of discipline," Krug says. "Their rules killed them."

On September 29, 1944, Krug and two other airplanes left Natal, Brazil, in pursuit of a German sub. They assumed the prescribed formation—fifteen miles apart from one another, according to Krug—and flew directly east. They arrived at their destination just as the German sub was set to submerge.

Another of the planes attacked first, but its bombs became "hung up," says Krug, when the hatch doors failed to open. "Come in; his bombs hung up," Krug recalls hearing over his radio—the signal for him to move up. By that time the Allies no longer had the advantage of surprise. The Germans filled the sky with anti-aircraft fire. Krug remembers even the type of guns.

On his first run, Krug's plane was hit, suffering minor damage. He managed to drop six depth charges, but none of them hit the target. He made another run, and the third charge landed just beneath the water's surface beside the sub and broke it in two.

After he dropped the life raft, Krug radioed back the coordinates of the survivors. He could see them scrambling to get onto the raft, men about the same age as he was, many, he imagined, with wives and children. Krug steered his plane west and headed back to headquarters.

"I did all that I could," he says. "I got them out of the water and into the life raft. Then it was in the hands of God and mother nature."

Reader Responses to Those Poor Bastards