During Peter Scoblic's sophomore year, Daniel Cruise '94, Michael Soussan '95, and Alexander Scribner ’94 started the Brown Journal of World Affairs. Although it was published on a shoestring out of the basement of one staffer's apartment, as soon as Scoblic saw the first issues, he decided he wanted to be involved. When the first editors announced that a meeting of students interested in joining the staff would be held at Cruise's house, Scoblic showed up, only to be told that the meeting was cancelled. The same thing happened when Scoblic arrived for the next announced meeting. When he showed up a third time, Cruise told him, "You must really want to do this. You're in." 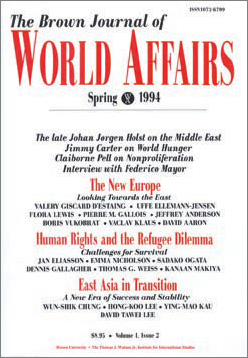 "It was wonderful and completely crazy," Scoblic recalls of the Journal's early days. "It was like a startup business. We were doing it in the house Daniel was sharing with Alex. It was our own little world. We had this incredible and somewhat macho work ethic. Everything would get condensed into this hell week where we would go thirty hours without sleeping and then take a three-hour nap."

The staff was ambitious, energetic, and hubristic. "It was also a result of a kind of oppositional culture," Scoblic notes. "A lot of faculty thought we couldn't pull it off. They thought it would be a cute student publication. Michael said, 'We're going to make it like Foreign Affairs. We're going to make it a serious journal.'"

The most striking characteristic of the Journal has always been the stature of the contributors its editors have persuaded to write for it. Among the contributors have been Jimmy Carter, Zbigniew Brzezinski, Boutros Boutros-Ghali, and Ahmad Chalabi. Success has come from a combination of naiveté and ambition. "We recruited writers through sheer audacity," Scoblic says. "We decided we would not be intimidated by these huge names. I remember calling up the office of the joint chiefs in the Pentagon, which now seems a preposterous thing to have done. I asked the woman who answered the phone if John Shalikashvili, the chairman of the joint chiefs, would like to write for us. She said I would have to send in a formal request. So I submitted one, and a few days later got a letter on fancy stationery saying that General Shalikashvili would be happy to contribute."

Scoblic eventually became a coeditor. "We would decide what we wanted to focus on in a particular issue, and we'd send out dozens and dozens of letters. We didn't hear back from a lot of people, and we got a lot of rejections. But we managed to put together a lot of interesting names."

The editors were shameless about approaching classmates with prominent parents. U.S. Senator John Kerry's daughter was in one of Scoblic's classes, and through her he persuaded the senator to contribute a piece on nation building. "If you could actually get someone on the phone and talk to them about your interest in the subject," Scoblic says, "they would sense your sincerity about the subject and your belief that this is the person who's right for it. That sort of personal and intellectual enthusiasm was infectious.

"My first issue as editor we put together in my coeditor's basement. It was a ten-by-fifteen-foot room, and most of us were smokers. We'd sit there editing twenty-four hours straight. One of my editors had asthma and had to bring in an air purifier. The first interview I did for the magazine was with McGeorge Bundy. I drew up all these questions for the interview, but then I forgot about the questions and just got into a conversation with him and had a little argument with him. Here's this college kid ready to take on McGeorge Bundy!" Scoblic laughs at the arrogance of it all.

The Journal is still widely read, reports Scoblic, who is now the executive editor of the New Republic. "I'm amazed at how successful it is," he says. "It still has better bookstore placement than the New Republic."

Chef Gabriela Álvarez-Martinez ’11 draws from her public-health training and her Puerto Rican roots to create delicious food to sustain and heal those trying to change the world—starting with herself.
Politics & Law