Professor of Economics Glenn Loury calls it the "identity reflex," and in his Opening Convocation address in September, he warned this year's freshman class to be wary of it. The reflex, he said, could lead them to define their identity primarily through race, religion, ethnicity, gender, or sexual preference. But "the particular features of one's social condition, the external givens, merely set the stage of one's life," Loury said. "They do not provide a script." 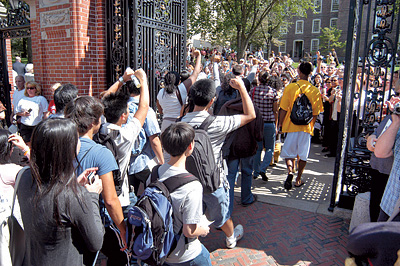 Frank Mullin
The Class of 2012 entered through the Van Wickle Gates as the fall semester began.

Loury’s address marked the beginning of Brown’s 245th academic year. He and President Ruth Simmons welcomed the 1,554 students in the class of 2012, some from as far away as Zimbabwe and Bali, with an invitation to use the next four years to use their intellects as never before. “The life of the mind has become one with every aspect of your being,” Simmons said.

Loury spoke next, telling the crowd about a childhood friend named Woody, an African American pale-skinned enough to appear Caucasian. Once, when Woody and Loury attended a Black Panther rally in Chicago, Woody shouted out his support for the group’s cause. “He was cut short in mid-sentence by one of the dashiki-clad brothers in charge,” Loury recalled, “who demanded to know how a ‘white boy’ got the authority to have an opinion on what black people should be doing. ‘Who can vouch for this white boy?’ asked the brother, indignantly.” Loury, despite his close friendship with Woody, remained silent: “That was not exactly a profile in courage on my part, I must confess!”

But the incident did prompt Loury to begin an intellectual journey, in which he said he became “free of the need to have my choices validated by ‘the brothers.’” During the 1980s, Loury was a vocal opponent of affirmative action and was aligned with many of the conservatives who fueled the Reagan revolution. He now holds leftist views, arguing that the widespread imprisonment of black men has turned us into a nation of “racist jailers.”
Loury urged the first years sitting before him to embrace a similar level of intellectual adventure. “One comes to the university to learn how to think, to gain an awareness of the central questions with which reflective people have struggled over the centuries,” he said. “It is a place to be challenged, to be argued with, and to be confronted with … ways of looking at the world that are different from one’s own.”

“One must strive to live authentically,” Loury added, by which he meant that individuals must construct an identity that integrates all their various roles in society—everything from black activist to mother to teacher. Race, gender, ethnicity, religion, and sexual orientation are important, he said, but “to the extent that we blacks see ourselves primarily through a racial lens, we may end up sacrificing possibilities for the kind of personal development that would ultimately further our collective racial interests.”

Loury left the assembled students with this message: “The most important challenges and opportunities that confront us derive not from our cultural or sexual identities, not from our ethnic or racial conditions, but rather from our human condition.”

Reader Responses to Beyond Identity Politics