Rhett S. Jones '72 AM, '76 PhD, of Cranston, R.I.; July 30. He joined the Brown faculty in 1969 as an associate professor of history and Afro-American studies; at the time of his death he was professor emeritus of Africana studies and history. His academic specialties included African American history before 1800, African American theater, Caribbean history before 1840, and race relations in colonial America. Soon after arriving at Brown he cofounded and became research director of Rites and Reason Theatre. 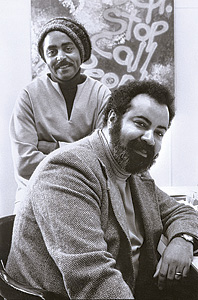 In 1972, he helped organize the Sankore Society, the University's organization of black faculty, administrators, and personnel. He served as chairman of the Transitional Summer Program Review Committee in 1975 (a precursor to the Third World Transition Program), and from 1976 to 1978 he participated in the first minority review committee to aid the Admission Office in decisions regarding minority applicants. In 1991 he was appointed director of the Center for the Study of Race and Ethnicity in America.

His work extended into the black community of Rhode Island, where he served on several boards and committees, such as the Black Studies Consortium of Rhode Island, the Rhode Island Black Task Force on Higher Education, the Rhode Island Black Heritage Society, and the state chapter of Kappa Alpha Psi fraternity. His professional memberships included the American Association of University Professors, the American Historical Association, and the American Sociological Association. He wrote several publications and received numerous awards from societies, museums, universities, and magazines. He is survived by two daughters, three grandsons, a brother, and several aunts and cousins. Former students and colleagues can post tributes at brownalumnimagazine.com.