Our Man in Beijing

While most Americans were watching Michael Phelps or Dara Torres compete at the Chinese Olympics, Paul Kelly was worrying about Beijing's traffic. As it happened, during the first week of the event, a bus carrying the Croatian rowing team collided with a van, snarling traffic so badly that tourists were told to avoid the highway and head to the subway. It was at this point that Kelly went on high alert. Could the van have been packed with explosives? Was the accident a setup for a terrorist attack in the subways? "In my business," he says, "you are trained to think there's no such thing as a coincidence." 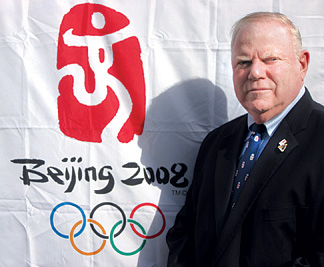 Kelly's business is security. Before retiring in 1996, Kelly spent more than 20 years working in the U.S. Secret Service, protecting presidents, vice presidents, and first ladies during their trips around the world. For the past 12 years, Kelly has worked as a security consultant specializing in dealing with China. His Cape Cod–based company, The Nauset Group, was hired this year to coordinate the security of several major corporate executives and their families while they attended the Olympics. Their companies were concerned about rumors that various ethnic groups in China were looking to kidnap Americans. Just before the Olympics, a bomb exploded on a bus in southern China, leading to the fear that something similar might happen in Beijing. Kelly had his hands full. Almost a year before the opening ceremonies, he had begun planning security details, motorcades, and emergency evacuation plans for his clients.

Kelly became fascinated with China at Brown after taking a course in the country's history. After graduation, with the Vietnam War raging, he served in the U.S. Marines. After he finished his service, the Nixon administration was revving up to normalize relations with China, and Kelly saw an opportunity to combine his military experience with his interest in China. By now fluent in Mandarin, he joined the secret service and in 1975 found himself guarding President Ford and Secretary of State Henry Kissinger during a visit to China. "I pinched myself and thought, I can't believe I'm here," he says. According to Kelly, there's a picture hanging in Beijing's famed Temple of Heaven commemorating a 1981 visit by then ex-President Richard Nixon; Kelly stands right behind him.

Kelly went to China many other times over the next two decades, getting to know the country better and better. "Just about any secret service protectee that went to China, I was involved with those visits," he says. And while there, he found a way to mix work with leisure. "Any place the dignitaries go, we go ahead of time and see it for ourselves," he says. "I guess you could call that sightseeing." Kelly also helped arrange security for government officials at several Olympics.

He also has the distinction of being able to say that he stopped an assailant from attacking Chinese leader Deng Xiaoping. This was in early 1979, when Deng was visiting Houston and Kelly was assigned to protect him. Deng was going out to a dinner event, Kelly recalls: "He was walking through the lobby of the hotel. A guy literally jumped out of the crowd and aggressively reached into his suit coat." Kelly could have reached for his gun, but with the man so close and already reaching into his pocket, "he would have beat me to the draw," Kelly says. "Instead, I punched him in the face. I knocked him out." As it turned out, the man did not have a gun, but was a Ku Klux Klan member who planned to use the spray paint he was pulling out of his pocket to paint the Chinese leader red and then cover him with racist leaflets.

In the end, Kelly says, his time at the Beijing Olympics this year went extremely smoothly. "The games ranked right up there in terms of efficiency and security," he says. About the only hitch he experienced was having someone else try to take a client's seat. The solution to that problem, he says, "was to get someone there early."

Reader Responses to Our Man in Beijing