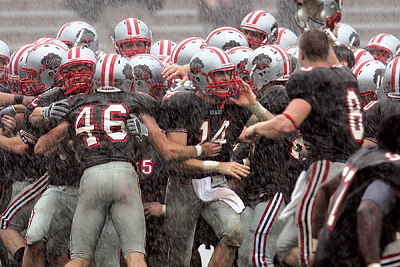 The Bears celebrated after defeating Harvard, 24–22, on September 27 by stopping a Crimson two-point conversion with 1:03 remaining. The team's jubilation continued for the next five weeks, as Brown went 4–0 in Ivy play for the first time in its history. By defeating Penn, 34–27, on November 1, Brown took sole possession of first place from the Quakers, who until then had allowed an average of only thirteen points a game.
What do you think?
See what other readers are saying about this article and add your voice.