If you looked at the roster of comic book writers of the 1930s through 1950s, you would have seen names like Al Capp (Li'l Abner), Joe Shuster and Jerry Siegel (Superman), Bob Kane (Batman), and Will Eisner (The Spirit). Their comics ranged widely in subject and style, but what these authors had in common was that they were Jewish. 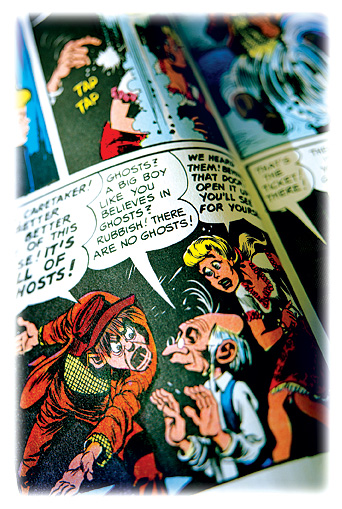 This past fall, the students in senior lecturer Paul Buhle's class Jewish Americans: Film and Comics organized an exhibit at the John Hay library exploring the links between the writers and their religion.

Superman's real name, Kal-El, for example, turns out to be a rough translation of the Hebrew phrase for the voice of God. The Fantastic Four's The Thing was likely derived from Yiddish folktales about the golem, a living creature often built from scratch by a rabbi. The comic book frame featured here, drawn by Jack Davis, was part of the story "Hoohah," which appeared in the first issue of Mad magazine in 1952. Davis worked extensively with Mad's publisher William Gaines, who was also Jewish and is credited with inventing the genre of horror comics.

In 1954, Gaines was forced to shut down many of his comic book titles after psychologist Frederic Wertham proclaimed that comics caused juvenile delinquency. Yes, you guessed it, Wertham was Jewish, too.