For her 2005 installation, Genealogy of the Supermarket, Nina Katchadourian hung a red damask–covered wall with framed portraits of such iconic grocery-store denizens as Aunt Jemima, Betty Crocker, and Mr. Clean. She arranged the images so that they created a fantasy family tree , with the buxom blonde St.Pauli Girl proffering beer steins beside her demure Sun-Maid Raisin sister with a basket of grapes. 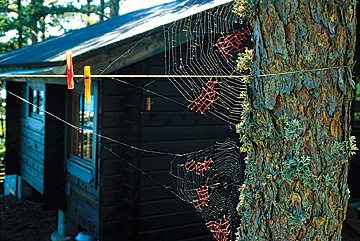 That same year, Katchadourian took on issues of language and translation in the video piece Accent Elimination . Her father, a retired psychiatrist and former Stanford dean and foundation president, is a Turkish-born Armenian who was raised in Lebanon; her mother, a literary translator and writer, hails from a Swedish-speaking enclave in Finland. Katchadourian videotaped her parents' work with a speech coach to shed their accents, as well as her own effort to acquire their foreign intonations. "If you can imagine accent as a concrete thing," Katchadourian says, "it would be like handing down an heirloom." Her father says the project drew his attention to how he spoke and its importance to his identity as an immigrant. "I became much more sensitive to the sound of my own voice," he says.

In other pieces, Katchadourian has substituted bird songs for car alarms and translated the sound of popping corn into Morse code. She used red thread to repair a spider's web and documented the spider's (unsurprising) rejection of her efforts in photographs. ArtReview has called her "a connoisseur of ingenious but doomed arrangements, senseless hierarchies, crackpot taxonomies."

"I approach things in an investigative spirit," says the Brooklyn-based artist, who works with any medium that suits her aims—photography, video, sound, found objects, sculpture. "What I always say is, 'Pick the right tool for the right job.' It's never important to stick to one medium—you let the concept guide you.... There aren't any rules around it." 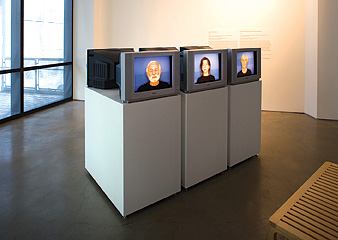 In Accent Elimination, she videotaped her parents' attempts to lose their accents and her own attempt to gain one.

In high school in Palo Alto, California, Katchadourian was drawn to performance art—music and theater. At Brown, she concentrated in both visual arts and literature and society, learning an interdisciplinary approach that has fed her art-making. A RISD course on book construction inspired her to think about the relationship between form and content. And from the late Allan Kaprow, a pioneering performance artist, she imbibed the notion of art as heightened attention to everyday experience.

Katchadourian's work has been shown in London, Paris, Barcelona, and Zagreb, and she received a 2006 retrospective at Skidmore College's Tang Museum . Many recent projects focus on the relationship between humans and the natural world. In Zoo (2007) , videotaped over the course of eight years at zoos around the world, video monitors and wall projections unfurl a disorienting array of animal sights and sounds.

"It's really just dumb stuff that surrounds us that's the starting point—stuff that's overlooked," she said in a phone interview this winter. "My job as an artist is really just to notice the things that I'm noticing—and to find ways to show those things to other people."

Julia M. Klein is a Philadelphia-based cultural reporter and critic.

Reader Responses to A Closer Look