The Cost of Survival

The first interview was the most shocking, playwright Lynn Nottage says.

The Congolese woman, in her mid-forties, told her that a soldier had raped and sexually abused her. The woman was the daughter of a chieftain, but her status didn't protect her. She'd been rounded up, separated from her children, and thrown in jail. The only reason she'd escaped, she explained, was that she'd bribed a guard with her wristwatch. "Her face was just contorted with pain," Nottage says. "I was not prepared to deal with it." 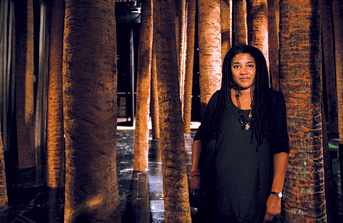 Tony Cenicola/New York Times/REDUX
Playwright Lynne Nottage on the set of her play at the Manhattan Theatre Club.
But deal with it she did, interviewing dozens of women from the Democratic Republic of the Congo, all with what turned out to be shockingly similar stories. Victims of the war that's been raging there for nearly a decade—the world's deadliest conflict since World War II—these women had been molested and driven from their homes; many resorted to prostitution in order to survive afterward. The women Nottage interviewed during two trips to Africa in 2004 and 2005 had fled to Uganda, where they worked with nonprofit organizations helping other refugees. Nottage, the recipient of a 2007 MacArthur Genius award, was determined to give voice to their experiences. "I wanted to tell the story of what women in Congo have to resort to to survive," she says, "and how women are often forced to make complex and morally ambiguous choices in order to survive war."

The resulting play, Ruined , was a joint production of the Manhattan Theatre Club, in New York City, and the Goodman Theatre, in Chicago, where it made its debut last fall; it opened at the Manhattan Theatre Club in late January. Ruined is set in a bar that doubles as a brothel in the Democratic Republic of the Congo, where a character named Mama Nadi both shelters and exploits her refugee boarders. While helping the women rebuild their lives, she sells them out as prostitutes. The theater critic for the Chicago Tribune described the play as "gripping" and "gut-wrenching."

A Brooklyn, New York, resident, Nottage is one of the most-produced playwrights in the United States. She has written about an astonishingly diverse array of subjects: an African American seamstress at the turn of the twentieth century in Intimate Apparel, American terrorists in Por'knockers , and the French court of Louis XIV in Las Meninas . "I think I do have a touch of ADD," Nottage says. "I think I get bored really quickly if I stay on one topic too long."

Nottage has written about Africa before—in the 1997 Mud, River, Stone, an absurdist play about a group of ideologically diverse hostages trapped in a room. That play, she says, arose purely from what she imagined Africa was like; she'd never been.

"I had many, many of the romantic notions that African Americans bring to Africa," she says. "That there's going to be someone there waiting to embrace you, an old woman who says, 'Come here, honey; I've been waiting for you forever. Give me a hug.' You realize, 'Oh. That old woman doesn't exist.'" This time around, Nottage says she had shed most of her preconceptions about the continent. She also feels she is a good enough traveler that, as she puts it, "I don't lead with my American hat."

Nottage says she originally intended to model Ruined on Bertolt Brecht's Mother Courage, a play about a woman during the Thirty Years' War in Europe who finds a way to profit from the battle that rages around her, but who also winds up losing her children. Nottage wanted to explore the complex tradeoffs people make during wartime. But she soon found that Brecht's play wasn't the right model for the story she wanted to tell. Brecht's approach, she says, was too abstract and intellectual for what she wanted to accomplish. "I want to bring the audience closer to the action so that they're emotionally engaged," she says. "I really do think that's when we act."

Based on what she saw during the play's run in Chicago, it's working. "People definitely leave [in an emotional state]," she says, "and some people leave wanting to do something tangible." The Chicago Tribune reviewer concurred, describing Ruined as "a remarkable theatrical accomplishment [that] could do much to raise consciousness of the horrors of the rape and genital abuse pockmarking the DRC civil war."

Reader Responses to The Cost of Survival