The Loss That Never Ends

To lose a child is every mother's nightmare; parents are meant to go first. But even that proper order holds its own nightmarish reality: to go first means to inflict on your child the horror that fairy tales and Disney movies capitalize on. And for the child, of course, it means losing everything. 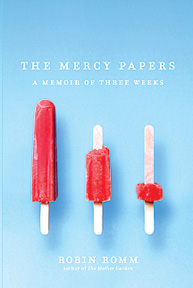 When Robin Romm was a freshman at Brown, her mother, Jackie, was diagnosed with breast cancer. The Romms lived in Oregon, but a hotshot doctor in New York City offered a better prognosis than the local doctor: ten years as opposed to one. So Jackie regularly flew east to see her oncologist, and Robin's college years were punctuated with trips to New York, where she and her mom spent hours in a waiting room listening to other women discuss their treatments, antidepressants, and bodywork. Romm never told her friends the purpose of her trips, and they envied the manicures and shopping trips they pictured her enjoying with her mother.

A trial attorney who relished a good fight, especially on behalf of the weak, Jackie Romm kept her cancer at bay for nine years before her tumors outgrew her body. When death seemed imminent, Robin came home with her dog, Mercy, who gives the book its title.

The Mercy Papers is Romm's account of her mother's final three weeks, when she clung to life and denied herself painkillers rather than leave her daughter behind. A ruthlessly honest writer with a biting sense of humor, Romm has no use for bromides. She's not sending her mom's spirit into the sunset on anyone's make-believe sailboat. Of a hospice nurse "with bluish teeth and black frizzy hair styled to look like a hunting cap," Romm writes, "Barb comes every few days to clip my mother's socks so her swollen feet will fit or to administer more morphine, more Percocet, more fentanyl. She's building a boat to sail my mother out.... Barb will build the boat of morphine and pillows and then I will have no mother and the days will be wordless and empty."

When even Jackie's friends urge Robin to let go—to help her mother let go—she just can't. She's not ready to be motherless, which may be this brave book's bravest and most truthful admission. For Romm, even witnessing her mother's agony is easier than facing the world alone.

Romm has survived and moved on, of course. She reports in an afterword that she did all the things you're supposed to after the loss of a parent: joined support groups, took walks, spent too much money. "I wrote stories that made readers flinch," she acknowledges. Her collection of short stories, The Mother Garden, is filled with disturbing fantasies about parenthood and loss. Three years after her mother's death, Romm now teaches creative writing at the University of Santa Fe.

"If this book does land in the hands of those in the midst of a tragedy, I can tell you this: It will never leave you," she writes.

"And I think in the complex way of truth, that that is the most comforting thing."

Reader Responses to The Loss That Never Ends