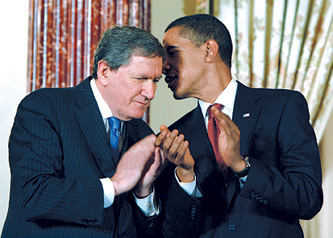 Ruth Fremson/New York Times/REDUX
Although President Obama had trouble getting some of his Cabinet nominees to stick, most other employees began work with relative ease. Here is a list of alums joining the Obama administration so far. As the BAM went to press, the Senate had not yet approved Thomas Perrelli's appointment.

Norman Eisen '85, special counsel to the President for ethics and government reform, Office of the White House Counsel

Richard Holbrooke '62 (above), special envoy to Afghanistan and Pakistan

Peter Rundlet '87, deputy assistant to the president and deputy staff secretary at the White House

Jill Zuckman '87, assistant to the secretary and director of public affairs, U.S. Department of Transportation

Reader Responses to Who's In?