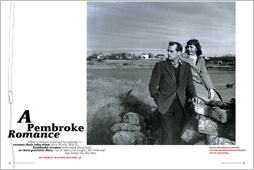 John Mayhew '43 was my high school algebra and calculus teacher at the Martha's Vineyard Regional High School from 1960 to 1964 ("A Pembroke Romance," January/February.) He was always my favorite teacher. When I told him that at our fortieth reunion, he replied that I probably told that to all my teachers. Well, I didn't, and he still is.

In high school, I would regularly get bathroom passes from my Latin teacher, stop in Mayhew's classroom when he was alone there, and talk about all kinds of things: the war, landing a plane on a carrier deck, parties with his fellow pilots who all expected to be dead soon, his return to Brown, and the reaction of his English teacher to his writings about the war—too crazy to be true, he was told—and sometimes math. I have a picture hanging at home of him in a small open boat dragging for oysters on Tisbury Great Pond, taken by my cousin Hollis Engly, another former student who admires him.

I have a connection to Tisbury Great Pond that's very similar to that of Shirley and John Mayhew. I proposed to my wife, Willa Sky-Bacon '03, there on Memorial Day weekend 2006. We were both wearing waders and fishing for striped bass. There weren't many bass that day, and I couldn't stop thinking about the ring in my pocket. I dropped to one knee while she was still holding the rod and proposed.

We are still happily married and on January 10 gave birth to our beautiful daughter, Beatrice, who was named in part because of a woman who lived on Great Pond. We look forward to returning to her family's home on the pond every summer.