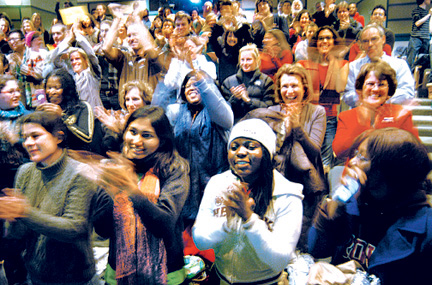 Hundreds of students, faculty, and staff gathered in Salomon and in Sayles on January 20 to watch the inauguration of Barack Obama on big-screen TVs. The mood, to put it mildly, was jubilant. "History is moving very much in the right direction today,"Ted Widmer, director of the John Carter Brown Library and a former aide to President Clinton, told the crowd. When Obama walked onto the dais in front of the White House, the crowd burst into applause. And after he was sworn in, there were hugs and lots of high-fives. At least one student unfurled a large American flag and waved it in celebration.