A Story Stripped to the Bone

As a Friend by Forrest Gander (New Directions). 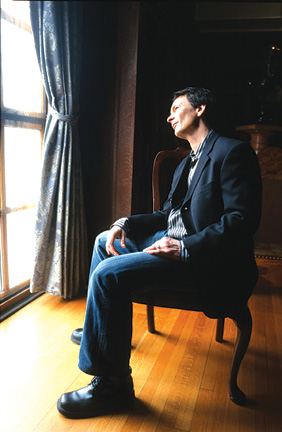 Mark Ostow
Poet Forrest Gander blurs the lines between love and death in his first novel.

For his girlfriend's birthday, Les, the protagonist of Forrest Gander's first novel, As a Friend, hangs a horse skull from the ceiling, douses it with lighter fluid, and sets it on fire. "It was the most beautiful thing I ever saw," she recalls. "The slow liquid-blue flame in the shape of a horse's skull flowering into a new dimension, turning slowly on a string in the dark." This image is like the whole novel in one stroke: creepy and haunting, lovely and strange.

Les is a poet, a land surveyor, a charmer, and a liar. He keeps a wife on a farm in Missouri, lives with his girlfriend, Sarah, in Arkansas, and seduces barkeeps and folk singers on the side. Still, his childlike earnestness and his wide-ranging brilliance and wit are irresistible. Even those who hate Les love him. His friend Clay feels towards Les equal parts awe, eros, and envy. "It was as if he'd come from a place where excitement wasn't taken to be a reverse indicator of intelligence and where it was normal to mention Cocteau and blue channel catfish in the same sentence," Clay says. "The opal blackness of his eyes was magnetic."

"There's that phrase of Samuel Johnson's that I really love," says Gander, an award-winning poet and professor of English and comparative literature at Brown: "'rammed full of life.' I'm of course drawn to—we're all drawn to—figures like that."

The triangular relationship between Les, Sarah, and Clay becomes toxic, and the story's denouement—Les's suicide by three gunshots—comes early in the story. The fallout from his death and the traces of his life that live on in his friends' memories and in a taped interview with a reporter make up almost half of the book. "What interests me," Gander says, "is what comes afterwards—what's on the side of the stage, those elements of friendship that are so complex: sexual attractions and jealousies and awe and competition and love."

Les resembles the real-life Frank Stanford, an Arkansas poet and sometime land surveyor who died in 1978 after shooting himself three times. Back then, Stanford was living with poet C. D. Wright, who is now the I. J. Kapstein Professor of Literary Arts at Brown and Gander's wife. Stanford's death was "the beginning of the germ of the novel," says Gander, who started it about twenty years ago and returned to it periodically, amongst seven volumes of poetry and other writings. "This was one way of telling [Stanford's] story, and one way of dealing with my complicated relationship with him," Gander says.

As a Friend is a story stripped to the bone—106 pages of gestures and sketches. "All the secondary, tertiary worlds of characters and friends I had to eliminate and focus on a very limited set that I could intensify," Gander says. "That's what poetry does. You can intensify and open up small things."

Reader Responses to A Story Stripped to the Bone