In April, Brown's faculty decreed that on the second weekend in October, instead of Columbus Day the University will now celebrate "Fall Weekend." The move was initiated by students who say that the fifteenth- century Italian explorer's legacy is one of genocide and slavery. As Reiko Koyama '11 put it: "It really just seemed inconsistent with the University's values. Columbus was a greedy, ambitious man. He committed all these atrocities." 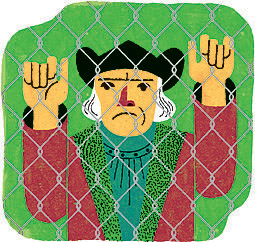 Timothy Cook
Not surprisingly, the move started a new skirmish in the culture wars. Italian-American groups protested the denigration of an Italian hero, while Rush Limbaugh derided Brown students for their "spoiled, rotten little skulls full of mush with brains that represent the arid expanse of the Sahara Desert." Providence's Italian-American mayor, David Cicilline '83, released a press release stating that "The decision to simply erase the celebration of an incredibly significant moment in world history and Italian American culture for the sake of political correctness does just the opposite."

At least you can say Brown saw it coming. "The faculty was aware that there would be blow-back publicity," says James Dreier, a philosophy professor and chair of the Faculty Executive Committee. "But I suppose the feeling was that Brown's responsibility was just to do the right thing here and deal with publicity as it comes."

Dreier abstained on the motion, and University administrators, including President Simmons, stayed on the sidelines. Under Brown's governance structure, the academic calendar is set by vote of the faculty.

Columbus Day dates back to 1937, when it became an official federal holiday commemorating Columbus's 1492 landing in the Bahamas. Over the past few decades, however, historians have discovered that Columbus's actions and legacy weren't as unambiguously laudable as they were once thought to be.

Assistant Professor of Hispanic Studies Nicolás Wey-Gómez supported the motion to rename the holiday. Yes, he says, "We're here, after all, partly because of [Columbus's arrival in the Bahamas]." It marked the beginning of Europe's colonization of the New World and gave rise to the flowering of Western civilization here. It also initiated trade and commerce that spread technology, agriculture, culture, and wealth around the globe.

Columbus established North America's first slave-trading post on the island of Hispaniola, home now to the Dominican Republic and Haiti. His men raped and massacred the indigenous population and inadvertently introduced infectious diseases. Within forty years of Columbus' arrival, the indigenous population on Hispaniola had been wiped out, victims of exploitation, warfare, and disease.

Because of all this, some U.S. states and cities have renamed or stopped celebrating Columbus Day. South Dakota honors "Native American Day," and Berkeley, California, celebrates "Indigenous People's Day." Rhode Island, which has the highest percentage of Italian-Americans of any state in the country, continues the tradition unchanged; Brown students and staff will continue to get the day off.

To honor Columbus with a holiday is "entirely offensive," says Jerry Wolf Duff Sellers '09 who describes his heritage as part Cherokee, Osage, and Lakota Indian, as well as Irish and Italian. "Columbus himself was an orchestrator of mass genocide. He personally saw to the deaths of an entire population of people through enslavement."

Wey-Gómez argues that Brown has merely found a way to put into practice what most of the country has already come to accept about Columbus's mixed legacy. "This is a change that has already taken place across the nation," he says. "Columbus Day is a day remembered in many ways by many constituencies, including Native Americans who suffered some of the most negative consequences of that encounter."

But did the faculty really have to go so far as change the name of Columbus Day?

"To be logical we should also change the name Brown University," says Professor of Chemistry Gerald Diebold, the vice chair of the Faculty Executive Committee. After all, Diebold notes, John Brown, after whom the University is named, was a slave trader.

"At least Columbus was one of the greatest explorers of all time." Diebold says. He voted against the name change.