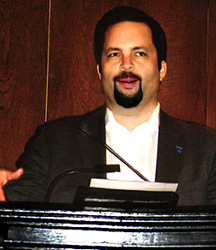 In February, Benjamin Jealous, president of the National Association for the Advancement of Colored People, spoke about the new challenges that lie ahead for his organization. Benjamin, who at thirty-six is the youngest person ever to head the NAACP, called for improving the quality of urban education and stopping police brutality. "We came of age in time to find ourselves the most murdered generation in history and the most incarcerated generation on the planet," he said about African Americans in his age group. He urged the students to fight for social change: "If you decide what change you want to see in the world ... and you fight as if you can only win, chances are you will win."
What do you think?
See what other readers are saying about this article and add your voice.