The Ramen Girl screenplay by Becca Topol. Available on DVD. 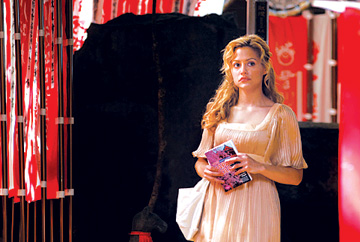 Courtesy Media & Entertainment
In Ramen Girl, Brittany Murphy plays an American who finds herself in Japan— through noodles.

"Maybe if she eats, she'll get out of here," the Japanese ramen chef Maezumi whispers conspiratorially to his wife. He says it in Japanese, of course, and Abby—the American protagonist of Becca Topol's film, The Ramen Girl—can't understand him. But even if Abby spoke his language, she wouldn't have heard him. She's too busy bawling. "I don't know what I'm doing with my life," she sobs. "I'm a complete mess ... I thought I was so brave coming to Tokyo. But Ethan just left me and I'm so alone." Neither Maezumi nor his wife can understand a word she's saying, either. "Do you think she needs to go to the hospital?" the wife asks. "She's a lunatic," he growls.

When a steaming bowl of traditional Japanese noodle soup soothes her stranger-in-a-strange-land, just-ditched-by-her-boyfriend soul, Abby, played by Brittany Murphy (8 Mile, Riding in Cars With Boys), hatches an improbable plan: she'll apprentice as a ramen chef. It was many lonely nights like the one portrayed in this scene that inspired Becca Topol to write the screenplay to this film.

Topol's fascination with Japan dates to high school; although she attended a Jewish day school in suburban Maryland, she studied Zen and was a devotee of Japanese literature. When she transferred to Brown from the University of Michigan as an East Asian Studies concentrator, she discovered that her Japanese language skills needed work. At the urging of East Asian Studies Professor Steve Rabson, Topol spent the following summer studying at International Christian University in Tokyo. And after graduation she returned to Japan, living in the small town of Musashisakai and working as a proofreader in a law firm—much like the Abby character in The Ramen Girl.

Living in the boonies and working at a dead-end job, "I found myself really alone for the first time in my life," Topol recalls. "I felt like I was disappearing. Returning home one day, I saw a ramen-shop lantern in the distance." Although Topol didn't train as a ramen chef—she invented that part—the shop did become her entrée into the neighborhood. "The owner really took me in, welcomed me," says Topol. "I met the local mama-san, and I met the electrician, and then the plumber."

Loneliness can be transformative, Topol says: "It's through being in a place where you have no set identity that you can actually see how big your identity can become. You can see possibilities for transformation that you may not have seen before."

And so it is for Abby in The Ramen Girl. Maezumi (played by Tampopo's noodle veteran, Toshiyuki Nishida) turns out to be a tyrant, yelling at her and forcing her to scrub toilets; at one point he smashes her cute pink cell phone with his wooden shoe. "In traditional Zen practice, the Zen teachers are really nasty," says Topol, who continues to study at a Zen center near her home in Los Angeles. "Your ego is so strong and so big that the only way to get it to subside is to beat it out of you." That, says Topol, is "what it was like for this girl to understand the spirit of ramen."

The Ramen Girl premiered in Japan in January and is slated for U.S. release on DVD in early summer. In the meantime, Topol is working on two new films: a character thriller set in New York City and a retelling of Faust. Will Goethe's striver sell his soul for sauerkraut? Perhaps. Topol has always appreciated the transcendent power of cuisine. "No matter how many cultural differences you have," she says, "you can appreciate another culture's food."

Reader Responses to Saved by Noodles