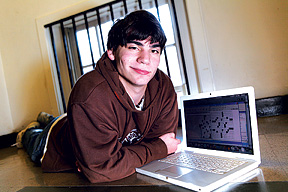 1. A four-letter word for fencing sword?

2. A seventeen-letter phrase starting with f and ending with r that can be summed up as "Indiana Jones's hat goes on solo adventures?"

3. A ten-letter word that starts and ends with c and means "someone who loves kisses?"

These are some of the clues devised by freshman Natan Last for the crossword puzzles he regularly creates for the New York Times. He's one of three current Brown students—the others are Joey Weissbrot '11 and Dustin Foley '09—who have contributed puzzles to the Times. All three belong to the Brown Puzzling Association.

Last began solving Times puzzles during his sophomore year at New York City's Stuyvesant High School, and within a year he was creating his own. The paper has published six of his puzzles to date—including one in the hallowed Sunday magazine—and another nine or so are in the paper's pipeline.

"He packs his puzzles with fresh, lively, colorful vocabulary with very little obscurity," says Times puzzle editor Will Shortz. "He has an amazing skill at being able to weave words into a handsome construction." Last is the second-youngest contributor ever to have a puzzle published in the New York Times Magazine.

Last says he was initially drawn to solving crosswords "because it just builds this sort of funny and useless knowledge." Times crosswords get progressively harder as the week goes on. Saturday's, for most mortals at least, is virtually impossible. Last says he can do a Monday puzzle in about four minutes. Saturday puzzles take several hours, though, and he says he often becomes stymied because "the answers predate my knowledge of popular culture by too many years." When he was starting out, he gave himself a small handicap—he could look up five clues using Google.

Last sees crosswords as the perfect melding of math and language, and says engineers and computer programmers are often better at them than English majors. He designs his crosswords by looking for patterns of letters in words. His Sunday Times puzzle was sparked by his observation that the letters in the word trigonometry could be arranged in the shape of a right triangle: trigo runs horizontally along the bottom, onome runs upwards from the trigo, and then etry diagonally connects the t in trigo with the e in onome. He placed this arrangement in the middle of the crossword grid. To reinforce the theme of triangulation, he placed the trigonometric phrases COS, TAN, and SIN in the puzzle. The clue to COS was "The Simpsons character who often refers to himself in the third person": "Disco Stu." The clue "Like things" gave him SIN: "two peas in a pod."

Last says the Times pays him $200 for a weekday puzzle and $1,000 for Sunday—not a huge sum given that it can take several months to design a puzzle. He's currently trying to build puzzles from the phrase Hakuna Matata, which is Swahili for "no worries" and the name Qui-Gon Jinn, a character from Star Wars. He likes the way the former alternates between consonant and vowel, and the latter appeals because it contains the less commonly used letters q and j, which lead to interesting solutions in the puzzle.

"This kind of stuff will just come to you for some reason," says Last, who plans to major in linguistics or economics. "I really like shoving a bunch of cool words into a puzzle."