During the final team dinner of the 1991 football season, head coach Mickey Kwiatkowski asked every senior to stand and say a few words about the team, the last game he would soon be playing, and his time at Brown. 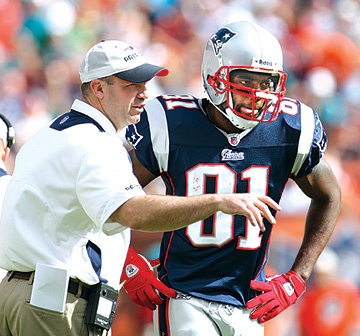 Perry was not the only senior to thank O'Brien that night. In fact, according to Perry, every senior rose and thanked O'Brien for his camaraderie. The love fest finally prompted one of the coaches to ask: "Why the heck is everyone thanking Billy?"

It wasn't because of his athletic prowess. O'Brien describes himself then as "an average player on some below-average teams." The Bears, in fact, were 1–9 during the season Perry describes. "I played hard," O'Brien says, "I think I had a decent sense of humor, and I had some fun playing."

"Bill's sense of humor, charismatic personality, and ability to tell stories were the reasons why teammates would gravitate to him," Perry says. "He could tell the same story ten times, and even if you heard it all ten times, you would laugh just as hard, if not harder. He not only got a few laughs out of us during a dismal year, he made showing up for practice a lot more enjoyable."

After graduation, O'Brien joined Kwiatkowski's staff at Brown, assisting with the tight ends. When Kwiatkowski was replaced by Mark Whipple '79 for the 1994 season, O'Brien stayed on. In 1995 he moved on to Georgia Tech under head coach George O'Leary, who switched him to offense.

"Coach O'Leary put me on offense right from day one," O'Brien says, "and I've never been on defense since."

During his eight seasons at Georgia Tech, O'Brien broadened his portfolio, working as running backs coach, offensive coordinator, and quarterbacks coach. In 2002, his final season with the Yellow Jackets, he became assistant head coach.

Maryland was the next stop. He coached the running backs there for two seasons, helping the team reach the Gator Bowl in 2003, when Maryland defeated West Virginia. In 2005, O'Brien completed the first of two seasons as offensive coordinator and quarterbacks coach at Duke.

In 2007 the Patriots called. His progress has been rapid. O'Brien joined the coaching staff as an offensive assistant, helping the team achieve a perfect 16–0 regular season record on its way to the February 2008 Super Bowl. Last year O'Brien was promoted to wide receivers coach, which enabled him to work with the likes of 2008 Pro Bowler Wes Welker and six-time Pro Bowler Randy Moss.

Then, after Patriots quarterbacks coach Josh McDaniels accepted the head coaching job with the Denver Broncos in January, O'Brien became the Patriots' quarterbacks coach. This season he'll work with Tom Brady, who has been to four Pro Bowls and has led the Patriots to three Super Bowl victories, as Brady returns after missing most of last season after injuring his knee during the first game.

"It is unbelievable," O'Brien says, "to be able to come to work every day with these guys who have great work ethics, excellent knowledge of the game, and are obviously really talented players. Everyday you come in here, you know that you're in a special place."

O'Brien describes himself as competitive, intense, detail-oriented, and a good communicator with his players. "I try to be as prepared as I can every day," he says. "It is not what you know; it is what the players know. And it is your ability to teach them and help them understand how you are going to attack this opponent. You want to make sure you're as prepared as you can be when you go out on the field or in the meeting rooms to help these guys get to where they want to get to. Obviously, you're at the top of your profession when you are working with guys like this."

His old teammates can only imagine what O'Brien adds to the locker room. "It is clear to me that Billy is doing something he truly loves doing, and I can guarantee you that his fellow coaches and players look forward to hearing Billy tell them a story, any story," Perry says. "If he was that much fun to be around on a 1–9 team, I can barely imagine the amount of good laughs and good times he has had with all the winning teams he has coached during his career."

O'Brien says that it was Brown that first taught him to aim high. "Brown is a unique place," he says. "Brown really encourages you to be whatever you want to be. I had wanted to be a coach for a long time, and no one at Brown ever said, 'Well, you can't be a coach.' I think that is the cool thing about Brown."

Gordon Morton is the author of a history of Brown athletics.

Reader Responses to Average? No.