Bringing Football to the People

Two weeks after he graduated from Brown, Nicholas Krippendorf boarded a plane and flew to China. He knew almost nothing about the country, but had always wanted to visit. "I couldn't speak a word of Chinese, I didn't know anyone there, and I had $300 in my pocket and $20,000 in loans," he recalls. 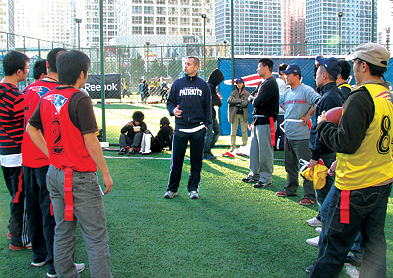 Courtey Nicholas Krippendorf
Krippendorf teaching the Chinese flag football.
What he found in China—or what found him—was professional football. Six years after he arrived, Krippendorf learned from a friend that the New England Patriots were looking to promote their team in Asia. The Chinese, whose big national sport is basketball, knew nothing about football, much less the Pats. This made Krippendorf something like a missionary, although instead of spreading Christianity he was preaching the rules of football. "I planned to be in China one year," Krippendorf says. Settled happily in Beijing, he now says he has no plans to leave in the near future.

A New Hampshire native, Krippendorf attended Northeastern Univ. in Boston on a football scholarship before transferring to Brown, where he played wide receiver for the Bears. But a year after he arrived in Providence, he burst a disk in his back. "I had friends at the time who had gone to the NFL," he says, "and it was sort of depressing to have my career end the way it did. The funny thing was I went to China to escape football."

During his first several years in China, Krippendorf taught English and business etiquette to Chinese executives. He also during this time flew to the United States to train to become a Navy SEAL. The military told him 2006 would be his ship date, but then he tore the cartilage in his knee during a Navy fitness test. That put an end to the SEALs and, one year later, Krippendorf chanced onto the Pats gig.

At the time, the National Football League had hired a marketing operation in China to do outreach for the League, but the Pats were the only individual team promoting themselves there. Krippendorf began by redesigning the team's barebones website, complete with video, Fantasy Football, and live streams of games. Dozens of Chinese students found their way to the site and soon the country had twenty registered Patriot fan clubs through which neophyte football enthusiasts received team paraphernalia and updates on the team's progress. "The Chinese are very curious and very willing to try new things," Krippendorf says. He adds that because football is "the quintessential male sport ..., the men like it and the women like the men who play it."

In 2007, Patriots tight end Benjamin Watson flew to China and led what Krippendorf calls "a media boot camp" for the Chinese press, teaching reporters to play the game. "My goal was just to get a football in their hands, get them out on the field, and teach them how to throw and catch and run and play a game," Krippendorf says. "Then they'll leave liking the sport and wanting to learn more about it."

Watson also did a short tour of Beijing, visiting a Reebok store and the Great Wall, where he appeared with mascot Pat Patriot. "It was a huge success," says Krippendorf. "I had media calling me up asking for my support because they wanted to start a media pick-up football league."

Last year, China hosted what Krippendorf says was the first-ever intercity flag football competition. Thirty teams from Beijing, Shanghai, and Jinan showed up. There were also cheerleaders and, just like at U.S. games, there was heavy promotion of protein drinks. The culmination of the events was to be a game between the Pats and the Seattle Seahawks in the summer of 2007. It was postponed and then a few months later, cancelled altogether. Krippendorf says the logistics of coordinating the game back and forth between the United States and China became too complicated and time-consuming to make the NFL want to continue organizing the showdown. The Pats put a halt to their initiative in China, and Krippendorf found himself out of a job.

He is now consulting for a South Korean-owned cheerleading squad that is considered one of China's most popular dance teams. He plans to stay in China and would like to be involved should the Pats start up their operations over there again. In the meantime, he has this to console himself with: "Now you go online and there's dozens and dozens of vendors selling Patriots jerseys and hats and everything else," he says. "There are other teams, but by far the Patriots are the most popular."

Reader Responses to Bringing Football to the People