Past the razor-wire-topped gates and the security station of the Cedar Creek Corrections Center in Littlerock, Washington, is a greenhouse where inmates water and weed plants, collect honey from a beehive, and stir compost bins. "The prisoners are copartners with me," explains forest ecologist Nalini Nadkarni, who started the greenhouse program. "I see prisoners as undereducated and underexposed in terms of nature." 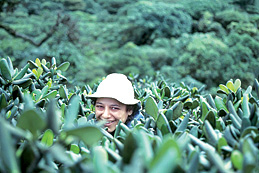 Courtesy Nalini Nadkarni
Nadkarni gets prisoners to go green.
A professor at Evergreen State College, Nadkarni has spent her career researching forest canopies, bouncing back and forth between Costa Rica and the Pacific Northwest in order to better understand the role treetop-level plants play in ecosystems. But part of her goal has always been to educate the public about forest conservation, and in 2005 she decided that prisoners would be ideal students. She hopes to branch out next into maximum security prisons. Cedar Creek houses low-level offenders, who are required to work six to eight hours a day until their release. "I think it is one of the saner ideas I've had," she says. "The key is in understanding that most prisoners are just like you and me; however, they made a mistake and are in a place where they are paying their debt to society."

When Nadkarni began teaching in the prisons, she focused on moss, which is rapidly disappearing from forests since it is used by the horticulture industry to package shipments of bulbs and as the major component of the peat used in certain biofuels. Moss plays a major role in supplying nutrients to the forest and offering shelter for a variety of animals, and Nadkarni wanted to see if it could be farmed. She had inmates test four different moss species. For two years they grew moss in flats and mesh bags, misting some and watering others, while recording their observations in notebooks. "I wanted to find fresh eyes and people who ask new and interesting questions that scientists never think to ask," Nadkarni says. Unfortunately, the moss didn't thrive, leading her to conclude that it simply cannot be farmed. That doesn't mean the prisoners didn't benefit, though. "Suddenly the conversations were about mosses and not about how much time the prisoners had left," Nadkarni says.

Looking to expand the program, Nadkarni received a grant from the Washington State department of corrections, and she is planning to start work soon at McNeil Island Corrections Center, a maximum-security prison on an island in southern Puget Sound. "It is really grim," she says. "It is like Alcatraz." This program will focus on recycling. She wanted to put out garbage cans for recycling, but, she says, "The superintendent says we can't do it because the inmates will find a way to bring in contraband. Apparently, that is a reality and we are trying to work around it."

Nadkarni hopes her work will spark similar projects at other correction facilities across the country. "I think the few simple things we have started at our prison demonstrate a different way of viewing prisons," she says. "Rather than only seeing them as horrible places for horrible people that suck money from our economy at horrible rates, we might now see them as places where inmates serving the biosphere and service to the community can take place."