It was known as Sam Genensky's Marvelous Seeing Machine. You placed a book or a document on a small platform beneath a television camera. Then, via closed-caption TV, the signal was beamed to a nearby monitor where you could read the contents. In the late 1960s, Genensky's Seeing Machine represented a major breakthrough for people with visual disabilities.

A Brown- and Harvard-trained mathematician, Genensky became partially blind as the result of a medical error on the day of his birth. To read a book, he had to hold it nearly to his nose. "There has to be a better way," a colleague told him one day at work, and the Seeing Machine was just that. It enabled Genensky to sit at a comfortable distance from the screen and zoom in to read what was written. He says once word got out in the disability community, his invention was adopted at workplaces across the country. "It worked very well and people were very satisfied," he says. "We knew we were on to something enormous." 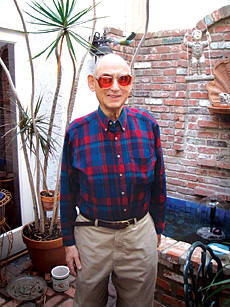 Courtesy Samuel Genesky
Genesky, who was partially blinded at birth, has lost all his vision over the last decade.
Genensky has spent most of his life advocating on behalf of the partially blind. Too frequently, he says, they are given the same services as the fully blind, preventing them from making good use of the sight they have remaining. Why offer the visually impaired only braille, he says, when many of them could read a book with large enough type? In the late 1970s, Genensky founded the Center for the Partially Sighted, in Los Angeles, which helps people with limited sight use that vision to live independent and full lives. "When the partially blind went out in the world, they found that they either got no services at all or services that were appropriate for people who were totally blind," Genensky says. "Neither of these alternatives made much sense to me."

In addition to the Seeing Machine, he developed a system to help the visually impaired distinguish between the doors to men's and women's restrooms. "You had to get your eye up close to the sign and then, when you did that, a lady opens the door and there you are standing there like some kind of an idiot," Genensky recalls. "I decided we ought to do something about it." At the RAND Corporation, where he spent most of his career, he designed geometric shapes that were added to the bathroom doors—a 12-inch equilateral triangle for males and a 12-inch wide circle for females—helping the visually impaired to discern them from a distance. The system is now standard in new and renovated public buildings in California.

Genensky is currently advocating the use of talking alarm systems at busy traffic intersections in Santa Monica, where he lives. The alarms say, "Wait" while the light is green and tell pedestrians to cross when the light turns red. They also count off the number of seconds left before the light changes again. "It gives you constant feedback," Genensky says.

Genensky retired in 1996, and over the last decade his sight has declined. He is now for all practical purposes blind. "People sit around in a room with friends and family and they'll look at pictures and I can't see them," he says. "You can yell and scream about that, but it's not going to do you any good. All in all, I can't complain."