You could feel the power surge when Jack Nicholson , sporting his trademark grin, strode down the aisle of Salomon Hall's De Ciccio Auditorium April 25. On stage that afternoon were three Hollywood giants: producer Robert Evans , whose credits range from Rosemary's Baby to The Godfather; Brad Grey , who produced The Sopranos before taking the helm at Paramount; and Variety's Peter Bart , who moderated the discussion. 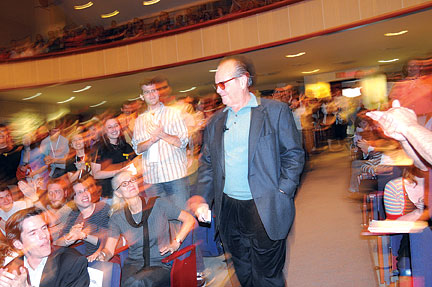 Photos by Frank Mullin
Jack Nicholson draws the crowd to its feet.

"I have no idea how to introduce Jack," Bart said, impressing upon his mostly student audience the singularity of the event they were about to witness. "Jack doesn't do this. He doesn't do festivals." Plus, Bart said, the Lakers were playing in Los Angeles, and Nicholson does not like to leave L.A. during basketball season. The crowd went wild.

In the front row of the auditorium sat the reason for Nicholson's presence on campus: his daughter Lorraine '12. Brad Grey, too, has kids at Brown, and Evans taught film at Brown in the 1970s. For two hours, the four men sat in big armchairs on stage, trading tips and memories and watching film clips that spanned their careers, from Nicholson's debut in Little Shop of Horrors to a slick trailer for Paramount's blockbuster Transformers: Revenge of the Fallen ("a big summer popcorn movie," Grey said).

They admitted to a few mistakes. Nicholson said Jerzy Kosinski asked him to direct Being There: "I read the book," Nicholson said. "I didn't see a movie in it." (Hal Ashby did.) 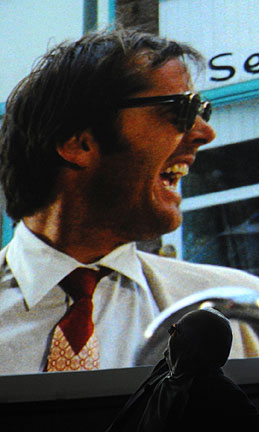 Nicholson watching himself in a clip from Easy Rider.

Asked about 3-D movies, Nicholson quipped, "The glasses are awkward. No one wants to take their date to the movies and wear paper glasses."

He declined to pick a favorite role—"They're like children. You can't afford to have favorites"—but he did admit to having a soft spot for Easy Rider. "I said a moron could play this part—which I proved," he recalled. But, he said, "This movie made me a movie star. Just like that."

In the Q&A session afterwards, a student asked Nicholson what the hardest part of the job was. "Early calls," Nicholson replied. "I'm no good at nine o'clock in the morning."

"I feel the same way," the student commiserated.

Since 2001, the Ivy Film Festival has supplemented its annual student film competition with workshops and lectures by some of the biggest names in the business. This year's six-day roster included a talk by cochairman of Fox Filmed Entertainment Tom Rothman '76 (who's also a Brown parent) and a screening of Big Fan, the directorial debut of former Onion editor Robert Siegel, who wrote the screenplay for The Wrestler. Afterwards, Siegel met with a small group of students and answered questions about writing, directing, and why he finds the actor Patton Oswalt—who stars in Big Fan—more interesting than, say, Brad Pitt. "I hate when they cast a really good-looking actor," Siegel said; "it's too distracting."

Asked how he learned to direct, Siegel admitted to picking up a copy of Filmmaking for Dummies. "I'm a big believer in just doing it," he said.