President Ruth Simmons posed for photos and accepted dozens of hugs from incoming students after they marched through the Van Wickle Gates, September 9. But when she stepped up to the lectern to open Brown's 246th academic year, it was clear that she wanted the incoming students to know that times were tough. 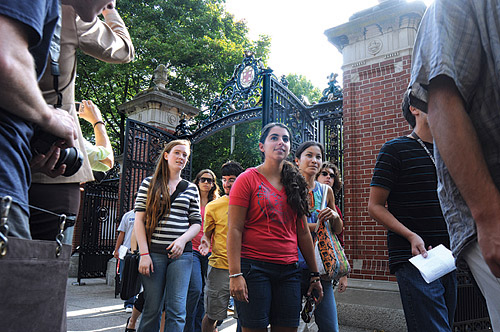 "This year the fallout from the financial crisis will continue as universities gird themselves for continued reductions to address the dramatic losses of revenue due to smaller endowments," Simmons said. She told the 2,000-plus new undergraduate, graduate, and medical students seated on the College Green, "Those who are returning this year may in their day-to-day experiences notice a few changes due to these reductions—events may be less lavish, services may be somewhat slower, programs may be slightly fewer."

The keynote speaker, the Stephen T. Olney Professor of Natural History and Professor of Biology and Environmental Studies Johanna Schmitt, also sounded a grim note, though her subject was global warming. "Humans are transforming the environment at an utterly unprecedented rate," she said. "It will take billions of years to regain the diversity that is being lost." 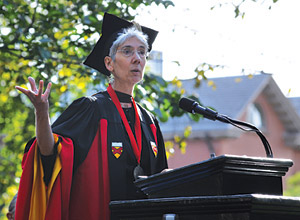 But Simmons' and Schmitt's messages weren't completely gloomy. In fact, both offered a lot of hope. Simmons said Brown had weathered the economic downturn well enough last year that "we open this year with renewed confidence, health, vitality, and future promise of this university." She pointed out construction all around the campus—everything from Faunce House's reinvention as the Stephen Robert '62 Campus Center to the new Perry and Marty Granoff Center for the Creative Arts. In fact, Simmons announced that the Robert Center will be completed by next fall, a year earlier than originally projected. She finished on a high note, saying that being at Brown "is the opportunity of a lifetime."

Schmitt didn't leave the class of 2013 hopeless either. The biologist tied her address to the 150th anniversary of the publication of Charles Darwin's On the Origin of Species, in which he laid out his revolutionary theory of natural selection. All first-year undergraduates had been asked to read over the summer The Beak of the Finch, which is about scientists studying evolutionary changes in finches on the Galapagos Islands. Schmitt said that while natural selection may seem to have "bleak implications for human beings," this view is now changing. She said the latest research suggests that certain organisms are not simply victims of the random and destructive forces behind natural selection. Instead they create "niches" for themselves—essentially micro-environments in which they survive and thrive. Human society is the niche people created to counter evolution's more draconian tendencies, and Schmitt said it holds the power to help us overcome the devastating evolutionary forces we've unleashed on the planet. 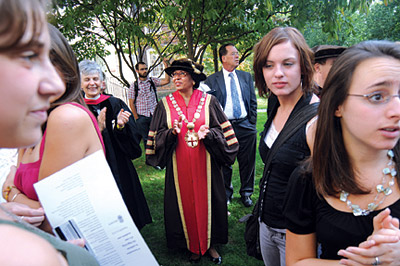 Schmitt offered the first-years some parting advice—"Construct your own niche at Brown," she told them. "Construct for yourself a niche where you will be able to thrive and evolve and help to make Brown a better place and the world better."

Reader Responses to A Better Place