"It's not a matter of if, but when," University Health Services Director Edward Wheeler stressed back in August while outlining Brown's plans for dealing with the anticipated outbreak of the H1N1 virus, better known as swine flu. He didn't have long to wait: by the end of the second week of the semester, 107 students had called or visited health services complaining of flu symptoms. 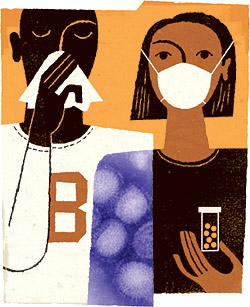 Under instruction from the Rhode Island Department of Health, Brown is not routinely lab testing patients for H1N1. Instead, health services staff are treating all patients who call or come in with swine flu symptoms—a high fever that comes on suddenly, accompanied by a dry cough and sore throat—as if they had H1N1. As a member of Rhode Island's flu surveillance network, though, Brown is performing lab tests each day on one patient who presents with flu symptoms. Of the first ten patients tested, three were confirmed positive for H1N1.

The campus life office has created a website—www.brown.edu/fluweb—at which students can report flu symptoms. The students are then advised to isolate themselves in their rooms, rest, drink plenty of clear fluids, and control their fever with ibuprofen or acetaminophen. If they have family nearby, they are urged to recuperate at home. Health Services is asking students to rest in their rooms until their fever has stayed low for twenty-four hours without medication.

Margaret Klawunn, vice president for campus life and student services, says an administrator will call all students who register at the flu website, checking in on them to make sure they know how to take care of themselves and to ensure that they have friends or roommates who can bring meals from the dining halls. Also, the website will notify professors of students' illness, she says. Klawunn is working with the dean of the College to encourage faculty to devise online materials to help sick students stay on top of their work.

Epidemiologists now know H1N1 is less dangerous than was feared when it broke out in Mexico City last spring. It is behaving much like the regular seasonal flu, causing several days of high fever and general misery before clearing up with bed rest. As a result, Rhode Island is no longer urging schools to try to contain the virus by closing down, says Russell Carey '91, '06 AM, Brown's senior vice president responsible for risk management. "I don't expect changes to our operations," Carey says.

Although milder than previously thought, H1N1 has proven extremely contagious, especially among young people with no previous exposure. As a result, Brown is focusing on prevention. The University has installed more than 100 hand sanitizer stations in public buildings around campus, and deans and health services staff are educating students about the importance of proper flu hygiene—coughing into their elbows when tissues aren't available, discarding used tissues, washing hands frequently and thoroughly, and avoiding touching their faces.

At orientation September 5, entering students were offered flu kits containing paper thermometers, hand sanitizer, a face mask, acetaminophen, and instruction sheets for caring for themselves should they become ill.

Wheeler says health services will not routinely prescribe Tamiflu or other antiviral drugs for swine flu. The drugs merely cut a day or two off the course of the illness, and "they have been overused," he says. "There is concern about developing resistance." Instead, health services will reserve antivirals for students with flu-like symptoms who also have HIV, diabetes, severe asthma, compromised immune systems, or other medical conditions that put them at increased risk. Similarly, he says, antivirals will be given to high-risk students with sick roommates as a prophylactic measure.

Brown anticipates that the one-two punch of H1N1 and seasonal flu will incapacitate large numbers of students, faculty, and staff this year. To minimize that impact, the University is urging the community to take advantage of Brown's seasonal flu vaccine clinics. Health services is offering free flu shots to students on a walk-in basis.

The final step in Brown's attempt to ward off the flu will be to supply the new H1N1 vaccine, which the FDA approved September 15. The government expects eventually to have 195 million doses available, and young people are in one of the target groups that the CDC recommends vaccinating. Wheeler said in an e-mail that he was optimistic that enough of the vaccine would be available for most Brown students aged twenty-four and younger to receive it.