They call her the "friendly tornado." "It's because you are always friendly, always cheerful, always upbeat," the office assistant who coined the moniker once explained to Sister Joan Lescinski ’81 PhD. "But you're never just resting, you're always helping us move forward. 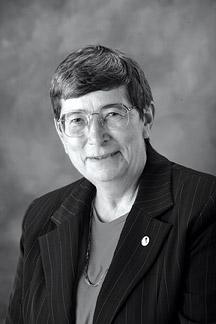 Lescinski, president of St. Ambrose University, a Catholic university affiliated with the diocese of Davenport, Iowa, is not your average, run-of-the-mill nun. Her opinions and always-on-the-move style don't match up with the caricatures common in plays and television shows. Lescinski skydives. She teaches literature classes on Jane Austen, and, if all goes as planned, she will soon get her pilot's license. She sees her religion less as a protector of dogma than as an intellectual tradition whose practitioners are critical and questioning in their search for truth. "Sometimes people raised in a tradition never critically question that tradition," she says. "Happily, my parents encouraged me to do just the opposite."

Lescinski entered the sisterhood right after high school, joining the Congregation of the Sisters of St. Joseph of Carondelet in Albany, New York. She had grown up devout and lower-middle-class in Albany, and, she says, "saw in the role models of the religious men and women I knew dedicated people that I greatly admired." Her parents let her know she was free to choose whatever career path she wanted, but religious life appealed to her the most, she says, "because I had a sense that I had a call to lifelong service."

Lescinski taught at a secondary school at first, but then her congregation urged her to get a PhD so she could work at a Catholic college. When she arrived at Brown to study nineteenth-century British literature, "I heard from some folks that the University had a history of anti-Catholicism," she says. "I thought, 'Oh well, that will be interesting,' but in the three-and-a-half years I was there I never in any manner experienced that."

Lescinski worked for two decades as an English teacher and administrator at several universities until 1998 when she was appointed president of St. Mary-of-the-Woods College near Terre Haute, Indiana—the oldest Catholic women's liberal arts college in the country. Lescinski worked seventy to eighty hours a week there, boosting enrollment to a record high and raising $25 million, more than any capital campaign in the college's 160-year history. This is also where she met the assistant who came up with the nickname "friendly tornado." Only five-foot-two, Lescinski admits to "high expectations and very high energy," though she acknowledges that her nickname has been used "positively and probably negatively" as well.

It was while she was still at St. Mary-of-the-Woods that Lescinski fulfilled a lifelong dream. For her fiftieth birthday, her parents gave her a present of skydiving lessons. As a child, Lescinski had an uncle who flew his own plane, and when he took her along for a ride one day, she instantly "became mesmerized by the experience," she says. She's loved flying ever since and long dreamed of the day when she could leap out of a plane and fall to earth with a parachute.

"It was one of the most thrilling things I have ever done in my whole life," Lescinski says. "When I pulled open my parachute, I remember feeling a high, a natural high. I had no experience of falling, more like floating." She says you could even describe the experience as religious: "It was something that lifted me way beyond myself."

As she neared sixty, Lescinski says she decided she wanted to work at a bigger institution, and St. Ambrose University, which happened to have a vacancy at the top, seemed the perfect fit. The 127-year-old university has about 4,000 students, three-quarters of them undergraduates. Her goals for the school are to increase enrollment and push the college to expand its reach globally. This means, she says, "sending more faculty and students out into the world and bringing more faculty and students here."

Lescinski says that, as much as she loved her time at Brown, being at a Catholic school appeals to her more. "We can have a conversation that doesn't tiptoe around religion and issues of religious faith," she says. "It's been for me a fine way to work with young people in their own search for truth."

Reader Responses to The Flying Nun