In the mid-1960s, Bill Polleys ’53spent his weekends teaching freestyle skiing at Waterville Valley in New Hampshire. He also helped the U.S. Ski Association devise a training manual for ski instructors; thanks to his engineering studies at Brown, he was particularly smart about the physics involved in ski turning. 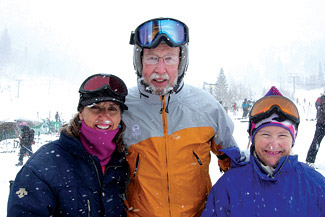 During the week, Polleys worked at Texas Instruments (TI), and the trouble started after he offhandedly mentioned his skiing work at a corporate retreat. Polleys saw no conflict between his job and his passion, because he wasn't skiing on company time. His boss didn't agree. "He felt that since I was running one of TI's businesses, I shouldn't be up there skiing." He soon shipped Polleys off to a promotion in Australia. "It was the demise of my ski teaching," Polleys says.

It wasn't until Polleys retired from TI in 1991 that he could return to his true passion. "I immediately went back to teaching skiing full-time at Waterville," he says. "I just love it." Alas, he no longer retained his moves from his free styling days—"I was too old for that," he says—but he was still highly qualified to teach the rigors of downhill to skiers of all levels. Polleys, who now splits his time between Rhode Island and Utah, has been a ski instructor ever since. "Skiing is a dance," he says. "It's beautiful. It's romantic. We advertise it like it's a macho sport, but I enjoy teaching women because I love to teach the dance of skiing."

Polleys' love affair with the sport goes back to his childhood when his family regularly went skiing together. After Brown, Polleys joined the U.S. Navy, learned to fly fighter jets, and became a flight instructor. "To fly a jet is a thrill that exceeds skiing," Polleys says. "Only those who've done it can imagine it."

Polleys left the navy in 1959 for an executive position at TI, where he worked from the 1960s through the 1980s, doing stints in Europe, Asia, and Tennessee as well as Australia. He skied every now and then for a week or two, but never any longer. Then, several years after his retirement, Polleys moved to Utah, where his oldest daughter was living. The skiing was superb. He says the Deer Valley Resort in Park City soon offered him a job, but that as he was walking off after accepting the offer, he was told the resort had a strict no-beard policy. "I said, 'See you later, I'm not shaving my beard,'" Polleys recalls. Instead he took a job at the Park City Mountain Resort and a few years later moved to the Canyons Resort in Park City.

As he's gotten older, Polleys has reduced the number of days he teaches to two a week. Last year, he ramped back his hours even further because, given the recession, he didn't want to take any income away from younger instructors who needed the money more than he did. Besides, the wear and tear on his back means he has had to pretty much give up skiing on anything but smooth terrain.

All the same, Polleys says, he has no plans to retire: "Not until this ski instructor there who is older than me quits. As long as you can walk, you can ski."