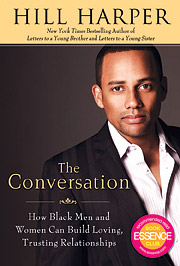 In his ongoing effort to help the black community, actor Hill Harper '88 has written two books of advice for young adults—Letters to a Young Brother and the bestselling Letters to a Young Sister. Now, he's opening the discussion to grown-ups with his new book, The Conversation: How Black Men and Women Can Build Loving, Trusting Relationships. Harper writes nostalgically of the easy, constant communication that marked his grandparents' marriages for more than fifty years, and he laments the mistrust and shallow values that he says keep many young African Americans single. First off, he says, black men and women need to talk to one another—to be friends. Women need to quit judging men by their earning potential, and men need to see past women's beauty—both ephemeral values, he says. In an interview with Essence, Harper praised the marriage of Michelle and Barack Obama, who was his law-school classmate. "I want that type of relationship in my life," Harper said.
What do you think?
See what other readers are saying about this article and add your voice.