Horror writer H.P. Lovecraft may have never gone to Brown but his archives are housed in the John Hay Library. 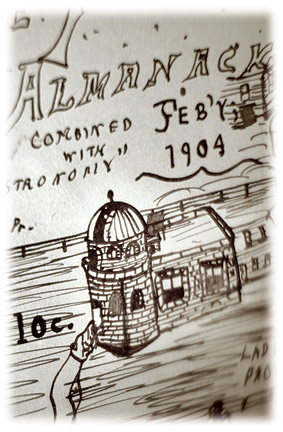 The boy whom Stephen King would later call "the twentieth century's greatest practitioner of the classic horror tale" grew up on Providence's East Side, where he frequented the Ladd Observatory, whose director was a family friend. Lovecraft owned three telescopes, through one of which he watched Halley's comet's passage in 1910. Starting in the 1890s he chronicled his observations in a series of three-by-four-inch hand-printed journals, to which his family members seem to have subscribed. Several dozen of the volumes survive.

Among Lovecraft's creations was The Rhode Island Journal of Astronomy, which he reproduced by hectograph, a printing process that uses pans of gelatin to transfer a special ink. The November 1903 issue was headlined "The Ladd Observatory Visited by a Correspondent Last Night." The correspondent was thirteen.

In his definitive biography of Lovecraft, S. T. Joshi '80, '82 AM describes the nervous collapse the boy suffered in 1908, during his junior year at Hope Street High School. Lovecraft never finished school, and so never enrolled at Brown. Ashamed, he stopped visiting Ladd Observatory, turning his attention instead to what he called his "weird stories."