The Prince of Pops

Among conductors of pops orchestras, Arthur Fiedler may have been peerless, but Erich Kunzel came awfully close. Kunzel, who led the Cincinnati Pops Orchestra since its founding in 1977, was second only to Fiedler in the energy, ambition, and popularity of his work. Over the thirty-two years that he led the Cincinnati Pops, Kunzel brought it international acclaim, winning several Grammy awards and selling more than 10 million records. In 2006, President George W. Bush awarded him the National Medal of the Arts, and last year Kunzel was inducted into the American Classical Music Hall of Fame. He died of pancreatic cancer on September 1 at his summer home on Swan's Island, Maine. He was 74. 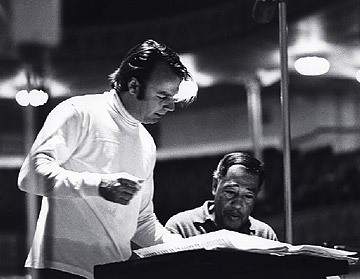 Courtesy The Cincinnati Pops
Erich Kunzel sounds out a score with Duke Ellington.
After earning his master's in music theory and performance at Brown, Kunzel stayed on campus for several more years to teach and direct the Glee Club. Among his students was David Gockley '65, who now directs the San Francisco Opera. When, in 1965, conductor of the Cincinnati Orchestra Max Rudolf invited Kunzel to become an associate conductor, Kunzel wasted no time picking up the pops baton. His first soloist was jazz pianist Dave Brubeck. That October, Kunzel led his first sold-out 8 O'Clock Pops concert. In 1970, Arthur Fiedler invited him to become a guest conductor for the Boston Pops.

"There were very few peple Arthur Fiedler allowed to conduct his orchestra," Dennis Alves, the Boston Pops director of artistic planning, noted in a statement after Kunzel's death. "Erich conducted [it] quite a bit, which was something special." In fact, Kunzel conducted the Boston orchestra more than 100 times, and his connection to it deepened in 1995, when one of his associate conductors in Cincinnati, Keith Lockhart, was chosen to succeed John Williams as only the third permanent conductor of the Boston Pops.

"When you go to a classical concert," Kunzel told the BAM in 1983, "you're going with the same philosophical and psychological outlook as you would to see a Rembrandt. You're going for aesthetic reasons. You're not going to an evening of Cole Porter for aesthetic reasons. You're going to have musical fun.... The happiest reward I can get is if people leave a concert that I have conducted and say, 'That was fun. I enjoyed that.'"

Under Kunzel's direction, the Cincinnati Pops performed at such disparate venues as Carnegie Hall, Radio City Music Hall, and the Grand Ol' Opry. With the orchestra, he recorded more than eighty-five albums, most recently From the Top at the Pops, released in August. More than fifty-five of these albums broke into the Top 10 Billboard Charts. Kunzel's orchestra won several Grammys as well as the distinguished Grand Prix du Disque and the Sony Tiffany Walkman Award for "visionary recording activities." In all, he appeared on more than 125 albums.

Kunzel also took the Cincinnati Pops on many international tours, among them a 2005 trip to China that included concerts at the Great Hall of the People in Beijing and that marked the first appearance of a pops orchestra in that country. (Back in 1998 Kunzel had conducted the China National Symphony Orchestra in the first-ever pops concert in China.) In 2008, Kunzel and the Cincinnati Pops returned to China to play in the Summer Olympics opening festivities.

In addition to performing, Kunzel was an advocate for better and more accessible music education. He chaired the Greater Cincinnati Arts and Education Center, which developed and raised money for the new K-12 School for the Creative and Performing Arts, which is scheduled to open next fall.

Even after learning he had cancer last April, Kunzel kept working. The diagnosis, he told the Cincinnati Enquirer in July, "wasn't on the schedule." Performances were on the schedule, though, and so Kunzel kept waving his baton. In June, he led the Boston Pops for the last time. On July 4, he conducted a concert at the U.S. Capitol with Aretha Franklin. On August 1, he led his beloved Cincinnati Pops for the final time. He laid down his baton and returned to the home in Swan's Island that he called Camelot, where he died a month later.

After his death, the Cincinnati Pops created a website where hundreds of friends and fans posted comments. One seemed to encapsulate them all: "I miss your energy and exuberance already. Imagining the shows you'll be putting together with choirs of angels in heaven brings me a smile. "

Kunzel is survived by his wife of forty-four years, Brunhilde.

October 19, the Cincinnati Pops held a free concert to celebrate Erich Kunzel's life. Among his protégés conducting that night was Keith Lockhart. Visit his memorial website at http://cincinnatipops.org/.

Reader Responses to The Prince of Pops