During the Bush years, Pakistani president Pervez Musharraf was considered an ally in the war on terror. These days he's an unabashed critic. 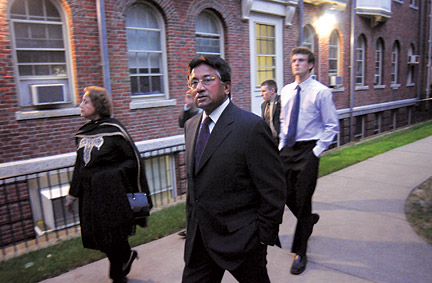 Photos by Frank Mullin
Former Pakistani president Pervez Musharref heads for the Salomon Center. "The Pashtuns were pushed toward the Taliban," he said.
According to Musharraf, who spoke on campus in late September thanks to the student-run Brown Lecture Board, the United States made three mistakes while waging its war in Afghanistan.

The first, he said, was to fail to ensure regional stability after Afghan rebels, who were heavily supported by the United States during the Cold War, drove the Soviet Union out of the country in 1989.

"This led to mayhem and war- lordom," said Musharraf, a former military general who was president of Pakistan from 1999 to 2008. "Pakistan was left high and dry to fend for itself."

The second mistake, the general said, was confusing the Taliban with Al Qaeda in the wake of the latter group's attack on America on 9/11. The two were distinct groups with different objectives and strategies, he insisted. The Taliban were primarily concerned with internal domestic issues, while Al Qaeda focused on launching terrorist attacks on the West. 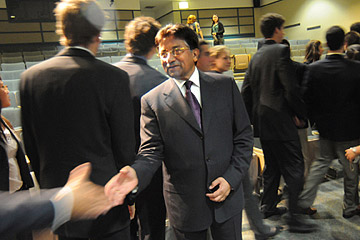 Musharraf meeting with members of the Student Lecture Board following his talk.

Finally, Musharraf said, the United States failed to work with the Pashtuns, Afghanistan's largest tribal group: "Therefore, the Pashtuns were pushed toward the Taliban."

Musharraf came to power in a military coup in 1999. Since 9/11, American officials have accused the Pakistani military of aiding the Taliban by providing weapons and turning a blind eye to some of its safe havens in Pakistan. Musharraf denies this charge. "It's quite the opposite," he said. "The arms and money flow into Pakistan from Afghanistan, not the other way."

Musharraf called for peace talks between the warring factions in Afghanistan as well as between Pakistan and India. As a general, he said, "I understand what war is. Therefore I want peace."