"You must be strong, because I am strong." 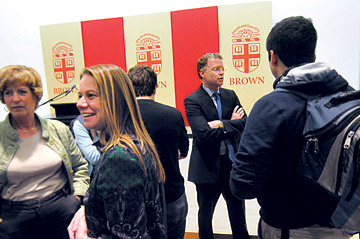 Photos by Frank Mullin
Rohde talks to students after his lecture in the List Art Center. At left is his wife Kristen Mulvihill '91, who led efforts to find a way to free her husband.

If there was anything that kept him going during his seven months and ten days as a hostage of one of the most radical factions of the Taliban in Afghanistan, Pulitzer Prize–winning New York Times reporter David Rohde says it was those words from his wife, Kristen Mulvihill '91, written in one of the few letters his captors allowed him to receive from her.

Rohde was captured in the Afghan desert on November 10, 2008. In the car with him were Asad, his Afghan driver, and Tahir, an Afghan journalist (who was also serving as Rohde's translator at the time). The three men were en route to a meeting with a Taliban commander. After they were forced out of their car, Rohde feared "we would be dead within minutes," as he wrote in a gripping five-part account of his capture and captivity published in the Times in October.

Rohde arranged the interview with the Taliban commander because, he says, he wanted to record firsthand the Taliban's view of the Afghanistan war for a book he is writing about the region. It's a decision he will always regret. "I unquestionably made a mistake with this interview," he told a packed audience in the List Art Center on November 16. In the audience was President Ruth Simmons, who was sitting near Rohde's wife and mother. The talk was sponsored by the Nonfiction Writing Program.

Although he deeply regrets putting his own family and colleagues through more than seven months of anguish, Rohde says he is particularly sorry to have endangered the lives of his driver and translator, both of whom also have families. During past kidnappings of Western journalists and aid workers, the Taliban has often beheaded the Afghans working with them first, as an example of what happens to locals who collaborate with Westerners. "I always felt that Tahir and Asad were in much more danger than I was," Rohde says.

Realizing that his captors had never been serious about negotiating for their release and that the last house they were in was the closest yet to a Pakistani militia base in which they might find safe haven, Rohde and Tahir successfully fled their captors shortly after midnight on June 20 of this year by climbing down a towing rope Rohde had found and stashed under a pile of clothing. Asad would later escape on his own.

Although Rohde spent some time in List Art Center summarizing what he details so dramatically in his Times series, he kept his talk short and informal, encouraging students to ask him questions. He smiled when describing his experience talking to visiting professor and fellow Pulitzer winner Tracy Breton's journalism class earlier in the day: "I know from Tracy's class this morning that Brown students ask difficult questions."

Rohde's experience gave him an unusual look at the daily life of the more extreme members of the Taliban, a life that he repeatedly describes as "an alternate reality." For one thing, he says, "I was shocked at how easy it was for the Taliban to move us around" in northwestern Pakistan. "The Taliban government we supposedly defeated in 2001 moved just a few miles to the east in Pakistan," where it operates as an independent emirate.

Emphasizing that he was among the most extreme of the Taliban, and that more moderate factions are interested mainly in ridding their country of U.S. troops, Rohde says his guards took classes from foreign militants on how to make roadside bombs and watched videos of hostages being executed. "Suicide bombers there were like movie stars in the United States," he says. One day, Rohde talked to a boy who said he gives a part of his weekly allowance to a fund for suicide bombers. When Rohde asked him what he wanted to be when he grew up, the boy used the local word for suicide bomber. His second and third choices were to be a holy warrior or a Muslim. The Taliban around him, Rohde says, were determined to keep fighting until they could establish "a hard-line Islamic emirate that spans the Muslim world." He described many Taliban leaders he met as more like members of a criminal organization than of a religious group. 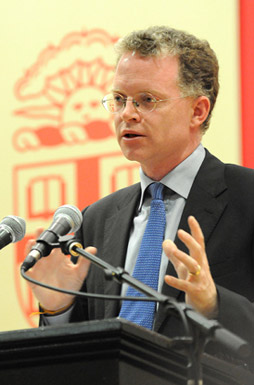 Although Rohde repeatedly said he did not want to comment on U.S. policy in the region, in answer to one question about winning the hearts and minds of Afghans, he noted that "It's up to the Afghan government and the Pakistan government to win the hearts and minds of the populace." He observes that the U.S. approach of training local police in Iraq has not carried over as extensively to Afghanistan, increasing resentment toward the unpopular U.S. troops doing the job.

Many of the U.S. actions in the country—from drone strikes to civilian contracting procedures—have undeniably enraged some Afghans, Rohde says. Many Taliban members believe the United States has committed unspeakable atrocities against Muslims and are convinced, for example, that millions of babies died as a result of U.S. sanctions against Iraq before the overthrow of Saddam Hussein. And as far as kidnapping Americans for ransom is concerned, Rohde says,"Many Taliban relish the idea of getting money from Americans to kill other Americans."

Rohde says a solution to the situation in the country is difficult to find. "Many have questioned the wisdom of the U.S. presence in Afghanistan," he observes, but his experience in the area has convinced him that "we simply can't walk away from the region and hope the problem goes away."

On the other hand, the United States can't just send more troops whose presence alienates so many in the country. Average Afghans, he believes, "want security, an honest government, good schools for their children, and jobs." What is needed, Rohde concluded, "is consistent, steady, and sustained support of moderates" within Afghanistan.

Glancing at his wife, Rohde also confessed at the talk that he had promised his family to give up war reporting.

Reader Responses to An Alternate Reality