On a fittingly chill autumn day, the Brown campus noted Veterans Day this year by remembering, as Rhode Island Senator Jack Reed put it, "the service of thousands" and "the contributions of many." 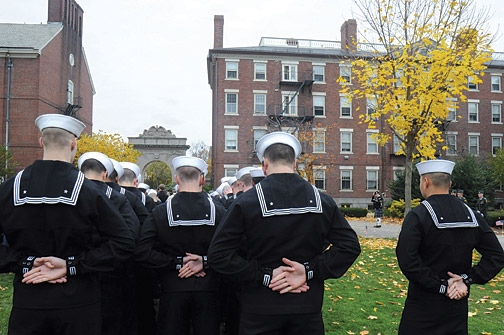 Photos by Frank Mullin
Some of the forty U.S. Navy personnel who attended the Veteran's Day event.

The November 11 ceremony marked a continuation of Brown's effort since 2007 to mark Veterans Day with an on-campus ceremony after many years during which the occasion was not commemorated. President Ruth Simmons also participated, a sign of the event's significance at Brown.

The commemoration began by the flagpole on the College Green with several dozen students, faculty, staff, and guests processing down to Soldiers Arch on Lincoln Field to the accompaniment of bagpipes. After Simmons and Reed spoke, several students read letters written from the battlefield during World War I.

Chaney Harrison '11, who completed three tours of duty in Iraq between 2004 and 2006 and who worked closely with the president's office to organize the event, said that "Brown's alumni had a tremendous history of service with the military," but that it had become forgotten as the University's "culture changed" and students became less interested in military service. Still, he said it was important each year to reflect on that tradition and "reconnect with the values" that led so many Brown students to fight—and some to die—for their country. 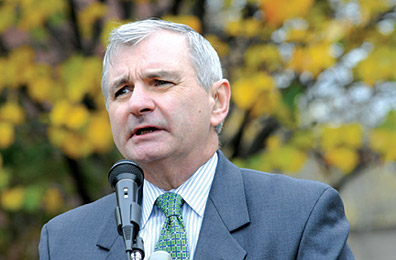 U.S. Senator Jack Reed addresses the gathering.
About forty members from the Naval submarine school in Groton, Connecticut, drove up to participate in the event. "It's an appreciation of all the soldiers and my buddies who lost their lives in wars," Sunny Yeung, one of the naval students, said afterward. "It was an honor to be here."
What do you think?
See what other readers are saying about this article and add your voice.