A country's gross domestic product—the market value of all the goods and services it produces—is pretty much the gold standard for measuring economic growth. When the Obama administration announced in October that the United States had come out of the recession, it was because GDP had gone up, and China is considered an economic powerhouse because its GDP has risen steadily for the last thirty years. 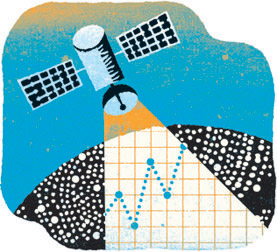 So it may come as a surprise to learn that GDP measurements, especially for the developing world, can be highly inaccurate. In the less-developed countries, many businesses operate illegally or otherwise under the radar, so their earnings are not counted in their country's official GDP tally. For this and other reasons, economics professor David Weil '82 says that GDP figures for some developing nations can be as much as 40 percent off. "A lot of the numbers we use in economics are just poorly measured," he says.

Weil, his departmental colleague J. Vernon Henderson, and economics grad student Adam Storeygard '07 AM believe they have come up with a new and sometimes better way of measuring economic growth around the world: light bulbs. By looking at satellite photos of the earth taken at nighttime, they believe they can estimate prosperity by the amount of artificial light a country generates. If you compare how bright a country was in satellite photos ten years ago with what it looks like today, Weil says, you can begin to measure how much economic growth took place.

In a working paper for the National Bureau of Economic Research published in July, Weil and his team reported that they'd come up with a new set of economic growth rates for countries around the world. In most cases, the numbers approximated the official GDP stats. "For the average country," Weil says, "lights and the GDP figures tell the same story." But there were surprises. The Democratic Republic of the Congo, for example, turned out to have a 2.4 percent growth rate rather than the 2.6 percent decline in growth documented in its GDP stats. On the other hand, Myanmar posted a 3.4 percent growth rate, more than five points below what it officially reports.

Of course, measuring so-called "night light" is far from perfect. For example, some poorer nations may have lots of economic activity going on, but in the areas where there's no electricity. Weil says he doesn't expect his new system to replace GDP, but to supplement it to make the final figures all that more accurate. "Economic statistics are like sausage," he notes. "If you want to enjoy them, you shouldn't see them being made."