When President Obama signed the American Recovery and Reinvestment Act in February, he hoped that this stimulus bill would both create jobs in the short term and support research to promote the economy's health in the long term. Since then, Brown researchers have collected more than $31 million in stimulus funds, most of it from the National Institutes for Health (NIH) and the National Science Foundation (NSF). 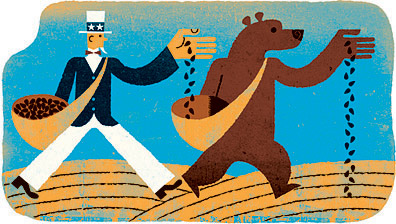 One of the principal beneficiaries has been obesity researcher Rena Wing, who is a professor of psychiatry and human behavior in the Alpert Medical School and directs the Weight Control and Diabetes Research Center at the Miriam Hospital. Of the $12 million she's received from six NIH grants, $2 million can be traced back to the stimulus bill.

John Donoghue, a professor of neuroscience and engineering, and Leigh Hochberg, an associate professor of engineering, received grants totaling about $3 million for their BrainGate research, which helps paralysis victims control their limbs through a sensor implanted in the brain's motor cortex.

Another major stimulus grant went to Professor of Sociology Phil Brown and a team that includes former Brown professor Rachel Morello-Frosch and the Silent Spring Institute in Newton, Massachusetts. They received $432,676 for research related to flame retardant chemicals, specifically a study of social responses to environmental contaminants.

Separating out stimulus money from ordinary federal research funds is trickier than you might think, says Vice President for Research Clyde Briant. One problem is that the funding agencies took different approaches to distributing the money. With $10.4 billion suddenly to spend, the NIH put out a call for new proposals and was flooded with tens of thousands of applications. The NSF, on the other hand, allocated its $3 billion stimulus by going back to proposals already in its pipeline, increasing the size of some existing grants and reevaluating projects it earlier had deemed worthy but couldn't afford. It also created a small number of new grants specifically for instrumentation and infrastructure.

The NSF funded all three instrumentation proposals Brown submitted. Brown and the NSF will share the cost of a $2 million transmission electron microscope for nanotechnology research. The microscope will enable scientists to peer inside objects at the nanoscale level and see their atomic structures.

Brown is also purchasing a $677,890 machine called a multicollector inductively coupled mass spectrometer, which will enable researchers in geology, environmental science, biology, medicine, and archaeology to determine the elemental composition of materials. The geological sciences department will house the new mass spectrometer, but Brown will share its use with researchers at several other local universities.

The NSF also granted Brown $2 million to modernize the CAVE, the campus's three-dimensional virtual-reality lab used by a variety of academic departments. The upgrade is expected to take about two years, and the goal is to have the new CAVE ready for the IEEE visualization conference, which will be held in Providence in October 2011.

In a non-research stimulus grant, the Swearer Center for Public Service, led by Roger Nozaki '89 MAT, received $63,000 from the Corporation for National Community Service. The one-year grant will enable the center to hire more tutors, mentors, and community liaisons to work in the Providence schools.

Although the University has not yet received any of the Department of Energy's $1.6 billion in stimulus grants, both Tim Leshan, Brown's director of government relations, and Briant say they are hopeful that the University's ongoing collaboration with Draper Laboratories will put it in a good position for future smart-grid and carbon-sequestration grants, both high priorities for the Obama administration.

There's a danger in all this largesse, though, Leshan warns. This sudden, and brief, infusion of cash could ramp up projects that can't be sustained when federal funding returns to its normal levels. But that's a worry for a later date.