Absent a Miracle by Christine Lehner '77 AM (Houghton Mifflin Harcourt). 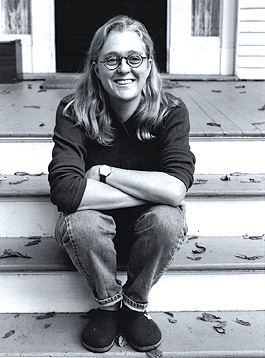 Courtesy Christine Lehner
Lehner: a friend whose clever commentary you find entertaining but whose phone calls you screen carefully.

Bad weather can make you crazy. Literally. At the start of Christine Lehner's absurd but entertaining novel, Absent a Miracle, the drop-dead-handsome Nicaraguan coffee farmer Abelardo Llobet Carvajal becomes hypothermic during a New York snowstorm and is found making snow angels while wearing only his pressed, blue-striped Brooks Brothers pajamas.

Abelardo has gone north to research female saints at the Hagiographers Club in New York City in an effort to buttress his late great-aunt Trist√°na's prospects of canonization. (Curing hiccups is her sole witnessed miracle.) When the snow strikes, Abelardo is visiting the suburban home of his Harvard roommate, Waldo Fairweather, but Waldo is off spelunking with his sons, and his wife, Alice, has stayed home to nurse their ailing dog, Dandy.

Alice isn't thrilled at the prospect of a houseguest; she has just been fired from two jobs, one teaching English to troubled girls at Our Lady of Precious Blood Academy, and the other hosting a call-in talk show called Dream Radio. Blindly in love with her husband, she's just learned from a friend that he's having an affair (not his first; Waldo is a beguiling liar).

The jobless and lovelorn Alice soon takes up Abelardo's cause, researching female saints (virgin saints, martyred saints, cross-dressing saints) at the Hagiographers Club. Ultimately she follows Abelardo to Nicaragua, where she encounters another kind of bad weather—a hurricane. Instead of making snow angels, Alice makes whoopee with Abelardo, who is attired once more in those blue-striped Brooks Brothers pajamas.

Lehner's plot is absurd, and she's a bit of a chatterbox, like a friend whose clever commentary you find entertaining but whose phone calls you screen carefully. However longwinded, she's a sharp, kind, and witty observer. Like a WASP insider, she depicts Waldo's brother's wedding reception on Slow Island, Maine, to which lobster boats ferry guests from the church and where much more champagne than food is served. Just as vividly, she sketches the magical realism of Abelardo's sprawling family home in Nicaragua, through which his stroke-addled father and mesmerizingly beautiful sister, Carmen, drift languidly. While Alice tumbles into bed with Abelardo, mudslides rip whole villages from the mountainside beyond.

Absent a Miracle makes no attempt at literary grandeur or acute social commentary. Like those sandwiches made with marshmallow fluff and peanut butter, it has just enough nutrition to keep you going. But it's fine company for a snowstorm—or even a vacation at the beach, hurricane or no.