Songwriter, composer, producer, and pianist David Yazbek can be a bit of a wise guy. He started his career writing comedy for David Letterman, and his Broadway musicals—The Full Monty, Dirty Rotten Scoundrels—tend toward the irreverent. His musical adaptation of the movie Women on the Verge of a Nervous Breakdown will debut at Lincoln Center in November. 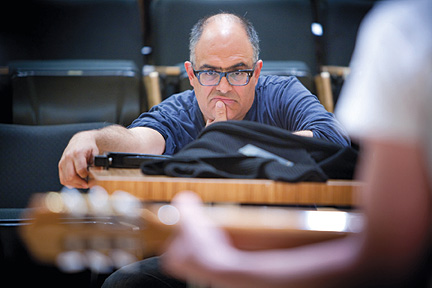 Scott Kingsley
David Yazbek '82 listened carefully to student-written songs and offered practical advice. "Lots of people start on the ukulele," he said.
Yazbek displayed another side of his personality during a visit to campus in early April. Although the purpose of his visit was to deliver an evening lecture, Yazbek agreed to teach a master class in songwriting in the afternoon. So after schlepping into Grant Recital Hall dragging a rolling suitcase and carrying a backpack and a guitar, he sat at the front of the stage, his back to the audience, and took notes while listening to students sing songs they'd written.

First up was Matt Bauman '10, whose fingers flew over the keyboard as he sang a wry musical-theater number that might have come straight from the Yazbek songbook: an April Fools joke, in which a man confesses his drunken lapses of the night before.

"So I may have sold our dream home to a big Italian mobster," Bauman sang. "And I may have used up all our savings to buy a Red Lobster." Yazbek approached the song in workmanlike fashion, pointing out that musical comedy gets power from perfect rhymes. "The whole song will be funnier if [the character is] taking the time to rhyme a line after killing two sisters," he advised. Also, Yazbek, said, "the song wants a payoff at the end—an 'April Fools!' Or a 'Why did she just kick me in the nuts?'" Develop the singer's character more fully, he suggested. "If this character is a dick—and there are people out there like that—make people uncomfortable with him."

Jacob Combs '11 sang a plaintive soliloquy from the point of view of a mother whose husband has left her and whose daughter is beginning a relationship with a high school boy. "Why is my family unraveling?" the mother asks.

"This is a really pretty song and a pretty idea," Yazbek observed, pointing out the inherent awkwardness of an actor standing alone on stage and breaking into song. He joined Combs at the piano and demonstrated how restraining the chords increases the emotional impact. "I want to get you to the place where people hear this song and will be choking up," he said, "even if they haven't seen the other songs in the show."

Yazbek seemed to choke up himself after Rosalind Schonwald '12 presented her song. Sitting at the piano, she explained that her song, "He," was written as an assignment in a songwriting class, where she'd been given a few random words to arrange in lyrics. She played a few simple chords and sang a haunting tune with the refrain, "He is feared by the sun." The room burst into applause, and Yazbek sat silently for a moment. "You're creating a world," he began, and then pulled up short, as if groping for words. "This is why the song is my favorite work of art," he said finally. "It's a complete world you've created."

He asked Schonwald what instrument she used to compose her music. "I write on the piano now," she said, and then sheepishly added: "But I started on the ukulele."

"Lots of people start on the ukulele," Yazbek said. "Do you write lots of songs?"

"When I make it important, I can't really write," Schonwald said. "My best songs come when I'm doing something else—like studying for a math test."

Yazbek nodded. "I'll be talking about that later tonight," he said.

Hear Rosalind Schonwald and other songwriting students at soundidea.org/music450/gisp.html.