Pharaoh Ramses II would have been proud. 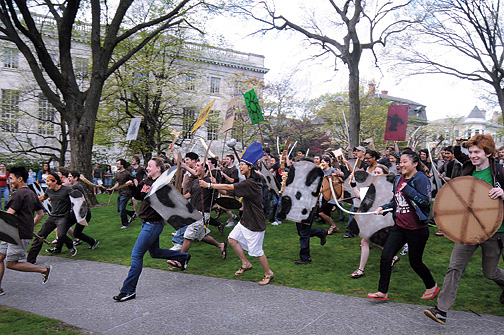 Frank Mullin
Students faithfully recreated the ancient Battle of Qadesh on the Green. The weapons were improvised, however.

There they were, all lined up on the Front Green, dozens of men and women waving their fists in the air and shouting his name: "Ramses! Ramses!"

Of course, the pharaoh would not have liked what the group of people standing across from them was chanting: "Ramses sucks! Ramses sucks!" Nor would he have understood why all these warriors were carrying hatchets, spears, and shields made from mop handles, aluminum foil, and cardboard. And then there were those two rickety wooden chariots. Ramses, worshiped as a god by his Egyptians, would never have deigned to ride in such a vehicle.

This was a historic reenactment, Brown-style. For their final project in late April, undergraduate students in Fighting Pharaohs: Ancient Egyptian Warfare, a class taught by Assistant Professor of Archaeology Laurel Bestock '99, staged the famed Battle of Qadesh, a late twelfth-century B.C. confrontation during which the Egyptians fought the Hittites for control of the city of Qadesh, on the Orontes River in what is now Syria. The battle featured thousands of warriors and was meticulously recorded by the Egyptians, making it one of the few ancient battles we know about in great detail. Bestock's students studied the records of the battle, learning about the weaponry and regiment movements, and then recruited about sixty volunteers to help them stage the conflict.

At times the whole affair looked like chaos, with the student Hittites and Egyptians running around thrashing each other with their homemade weapons. But in fact, there was some method to the madness, said Dani Candelora '11, one of the student organizers. She used a bullhorn to direct the warriors to come together and then disperse in the various directions indicated by the historical record. At first Hittite spies conned the Egyptians into believing the Hittite army was still days away. But the Egyptians managed to foil the sneak attack by calling on reserves from the north and south. Not surprisingly, Egyptian scribes portrayed the battle as a decisive victory, but the Hittite point of view remains unrecorded.

To be true to the Egyptian record, students carried out a common ritual that followed ancient warfare: cutting off the right hands of the slain to present to the Pharaoh in tribute. Only in this case, the "hands" were balloons, which the faux Pharaoh stomped upon to celebrate success.