I Can Do That

Julie Flygare '05 remembers feeling tired a lot at Brown, something she attributed to her course load and her workouts as a tricaptain of the women's squash team. When, after graduation, she began falling asleep while doing her homework at Boston College Law School, she figured the material was probably just boring. But when her knees began to buckle at seemingly random times—"I'd be laughing at a joke," she says, "and my knees would just give out on me"—Flygare realized something just wasn't right. 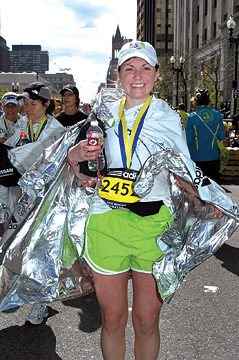 Courtesy Julie Flygar
Flygar after the marathon.
During her second year of law school, and just a few days before her twenty-fourth birthday, Flygare was diagnosed with narcolepsy complicated by cataplexy, which together make up a serious neurological disorder. (Cataplexy, a form of temporary muscle paralysis unique to narcolepsy, causes episodes of weakness, such as a sudden buckling of the knees or complete collapse.) In the months after her diagnosis, Flygare dipped to an emotional low. She realized that narcolepsy would not only require taking daily medications that make her nauseous, but also require her to re-examine her plans for the future. How could she make it as a young lawyer, for example, if she needed to nap twice a day? She decided to put her law career on hold.

Since getting her law degree, Flygare has committed herself to educating the public about narcolepsy and helping raise money for narcolepsy research. "Narcolepsy has this reputation for being silly," she says. "People have this image of me falling asleep when I talk to someone. That's not really the way it is. There is a ton of evidence that it's an autoimmune disorder. It's about as common as multiple sclerosis, but for some reason it doesn't have the public face of that disease, or anywhere near the research funding."

In April, Flygare became a hero to many narcolepsy sufferers when she completed the Boston Marathon. "I don't know anyone who has cataplexy this bad who's run a marathon before," she says. Flygare ran the race in just under five hours; her goal was not only to finish the race but also to raise money and awareness for narcolepsy. She was one of four volunteers running to raise money for the nonprofit group Wake Up Narcolepsy.

Before the race Flygare worried that the stimulation of the crowds and the event would cause her cataplexy to kick in. She wore a wristband with instructions to EMTs so they wouldn't think she was seriously injured if she collapsed to the pavement. She also took extra medication beforehand. "I felt a little bit of cataplexy in Wellelesly," she says, "a little bit of weakness when I saw my dad, my stepmom, and my fellow squash captain, Lillian Rosenthal '05, cheering me on. Mostly I just tried to stay in the middle of the road and not look at people."

The strategy worked. "I felt great," she says, except for a touch of tendonitis. "At around mile twenty-two, I said to myself, 'I'm just going to book it,' and finished strong." In addition to Rosenthal, Flygare's other cocaptain, Phoebe Anderson '05, cheered her from the sidelines, as did a number of narcolepsy sufferers who learned about Flygare's adventure through her blog and Wake Up Narcolepsy. "You are such an inspiration to everyone," e-mailed Monica Gow, whose young son has narcolepsy, after the race, "but specifically people with narcolepsy. I am so glad my son can look at you and say, 'Wow, if she did that, then I know I can do this.'"

Flygare, who lives in Washington, D.C., is writing a memoir about her battle with narcolepsy and hopes to become involved on Capitol Hill as an advocate for more narcolepsy-research funding.

Reader Responses to I Can Do That