I first met Becky Kellar '97 in the fall of 1996, when she worked for me as the public-address announcer at soccer games. During that winter, I had the chance to watch her on the ice as the women's ice hockey team dominated the competition. As she skated on the team with Katie King '97 and several other stars, I knew Kellar was good, but no one could have predicted at the time that she would go on to win four Olympic medals, including three golds. When hockey season ended, Kellar and King moved to softball and helped that team earn an Ivy title, with Kellar setting the program record for career hits along the way. 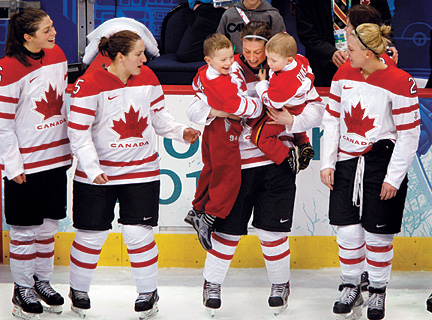 AP Photo/Adrian Wyld CP
Becky Kellar holds her sons after winning the gold-medal game.
After graduating, Kellar became a fixture on the Canadian women's Olympic hockey team. Her career ended in February of this year, when at the age of 35, she helped Canada defeat the United States, 2–0, in the gold medal game at the Vancouver Olympics. Kellar is now one of only four Canadian players who have been in every Olympics since women's ice hockey debuted in Nagano in 1998.

This medal, she said soon after returning home, was the most precious: "Being on home soil made it kind of special. We have a lot of fan support here. I had a lot of family here. I had twelve people here. It was the biggest crowd they have ever had for women's hockey, and that moment when you step out on the ice and almost 17,000 people start to cheer, and it just sounds like a big hum—it is pretty exciting."

Two of Kellar's loudest supporters were her sons, Owen, 5, and Zachary, 3.

The boys sported Canadian hockey jerseys with their mom's number on the back, and climbed over the team bench and on to the ice to celebrate with her at the end of the gold-medal game.

"They have done a lot on this journey with me," Kellar said. "For them to be there with me and share in the excitement and come on the ice at the end and be a part of that was pretty special as well. For my oldest one, especially, I think it is something he'll remember."

The preparation for the Games is grueling for any Olympic athlete, but it can be especially difficult for a mother of two young boys. Fortunately, Kellar had great family support. Her parents moved with her from their home near Toronto to the training center in Calgary for six months while she prepared for the Games. While most of the players just needed to find a place for themselves, Kellar had to search for housing in Calgary for three adults and two children.

"The nice part," she said, "was after a long day, and sometimes a very difficult day, I was able to leave hockey at the door and have the kids there waiting for me to play with or listen to about their day. It was nice to have that balance, too, so that everything wasn't always hockey."

Kellar said the 2010 Olympics were her last. With two young children, she has no immediate plans to race into another career, but is enjoying settling back into a more normal life and a regular routine.

"These Games left me in a good place to leave on a high note," said Kellar. "With these Games having been at home, it was almost a storybook ending for me. I've done everything I've wanted to do."

A MAN FOR ALL SEASONS

When you think of the Cayman Islands, you might think water skiing—but alpine skiing? One of the most unlikely athletes on the ski slopes at the winter Olympics last February had to be Dow Travers '11, the first winter Olympian ever to represent the Cayman Islands. Travers, who learned to ski on family vacations to Colorado, began to race competitively when he went away to school at age 14.

"Since then it has been a hunt for snow for me," Travers says. "I can't train out my back door like most people. I come with a huge handicap compared with everyone else I'm skiing against. They all ski in excess of 200 days a year. I struggle to find fifty, because I'm at Brown and I'm also playing a lot of rugby."

When he arrived in Vancouver for the Games, Travers attracted quite a bit of attention. "It was a great honor to be able to represent my country, but it was definitely a novelty," he says. "There was a lot of media attention while I was there. That itself got a little daunting at times, because a few days before the race I was doing three interviews a day." But when the opening ceremonies began, the magnitude of the Games and what he had already accomplished began to hit home.

Even the excitement of the opening ceremonies couldn't compare to the nervous energy of race day, he says, when years of preparation and work culminated in two ninety-second races.

"I had a little nerves," Travers says. "It was obviously a bit daunting racing against who I was racing against, but I didn't think about that on that day. I just zoned in and worked on what I could focus on. My aim for the Games was just to put down two clean runs and to make my country proud, and I think I did that. It was a good day." Travers finished sixty-ninth in the giant slalom in a field of more than 100 skiers. "I moved up thirty-two spots from the start position and was really happy. I couldn't have hoped for anything more."

Now Travers wants to compete in the 2014 Olympics in Sochi, Russia. "I'm going to go back to Brown now," he said shortly after the Olympics ended, "and finish my time up there, and then hopefully I can put down some more days on snow after Brown and then see where I go from there."

However, Travers may have some competition for his spot on the team the next time around. "I have a little brother who is nipping at my heels so we'll be in competition for the spot in the next Games," said Travers.

As a rugby player, Travers is also trying to become one of those rare athletes to compete in both the summer and winter Olympics. "I'll be going down to South America in July for the Central America and Caribbean Games," he says, "so that is something else that I'm looking forward to after Brown. Hopefully, we'll be able to go to the 2016 Games."

The Cayman Islands and summer sports: now that seems like a more logical combination.